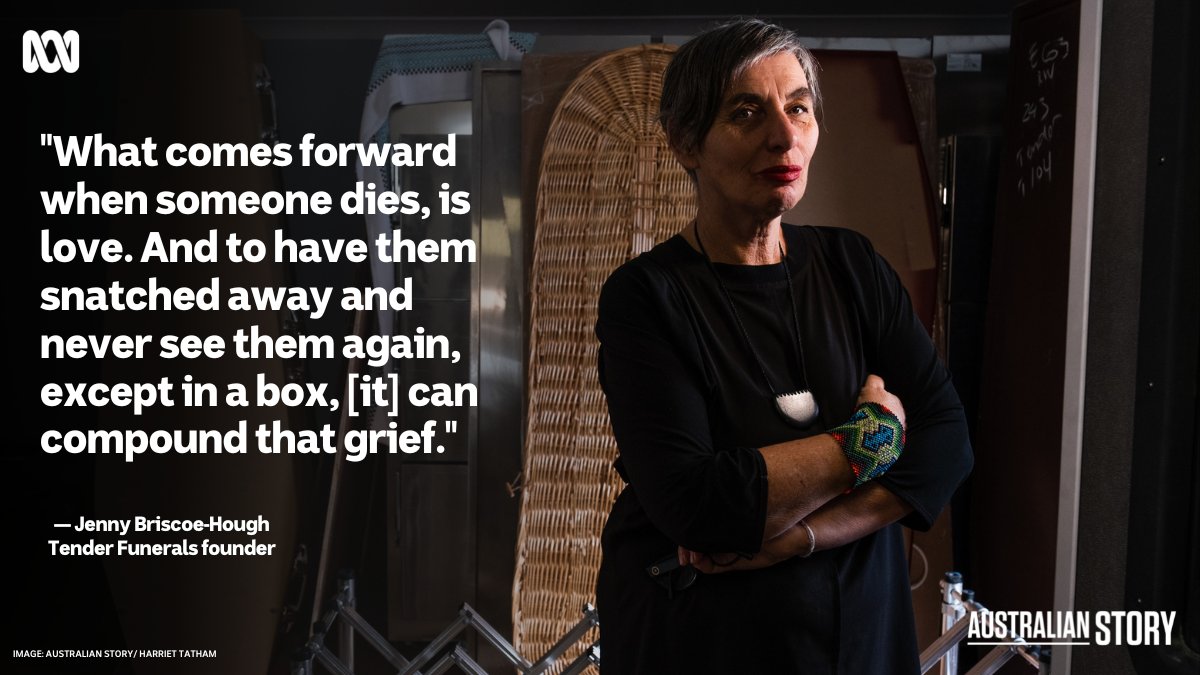 Jenny Briscoe-Hough says no one needs to be afraid of the dead. She believes spending time caring for the body can be “transformational” @tenderfunerals #AustralianStory.

Amy Sagar first considered a career in the funeral industry when she was 16. Fast forward and she’s at the forefront of a not-for-profit funeral service that’s transforming how we handle death in Australia #AustralianStory.

A not for profit funeral organisation is a great idea. Well done @tenderfunerals #AustralianStory.

Such an inspiring #AustralianStory on @tenderfunerals - really wonderful example that communities can do anything.

#AustralianStory The Irish have long got it right - a wake at home to farewell the dead as life goes on around them..

While things have improved in the last 20 years we are still very inadequate, restrictive and antiquated in the way we handle death in healthcare. Change is long overdue and it’s wonderful to see this happening in the funeral industry. #AustralianStory.

@tenderfunerals Your story on @AustralianStory was very, very calming and comforting. We need Tender in Brisbane..

WOW what a powerful & intimate @AustralianStory about death and putting the grieving & farewell of loved ones in the ‘Tender’ hands of families and friends..

I wish there was a @tenderfunerals in Melbourne just before COVID to celebrate the life of our darling Rhonda. What a gorgeous bunch of special souls taking the upsell out of funerals & showing how to say good bye gracefully @AustralianStory.

@xskinn I really enjoyed #AustralianStory tonight, brought back memories. we washed my Brother when he died, it was such a privilege to be able to care for him at home, his wife is an amazing woman she did so much..

Oh my gosh #AustralianStory. So personally meaningful for pretty much all of us. I really want to know if this can happen in the Central West New South Wales. ( community/family funerals as opposed to church/ funeral home )..

Thank you Jenny Briscoe and team for your perseverance and belief, you are amazing..

Great story tonight on @AustralianStory we need more of these affordable funerals & a lot of community engagement & networking. Death will come 2 us all. You are not going to die talking about it..

@nookienooo @AustralianStory Thx Nookie. You mean Tender. If they are all over the country now I will use them too. So important. I was planning to go with Bare. But these women are fab. And so is your experience. Glad it was so good..

@AustralianStory Thank you for once again presenting us with something special. Everyone should have this option. I’ve also been watching #TheCasketeers showing a beautiful Māori approach to funerals..

Definitely worth watching. This shows how much better we can manage funerals..

Tender Funerals - providing a revelation and revolution in family-involved funerals for those we Love most. Well done 👏✊🏻.