This is an unusual move. The Greens put Labor last on their how-to-vote recommendation for the NT Johnston by-election on 29 February. 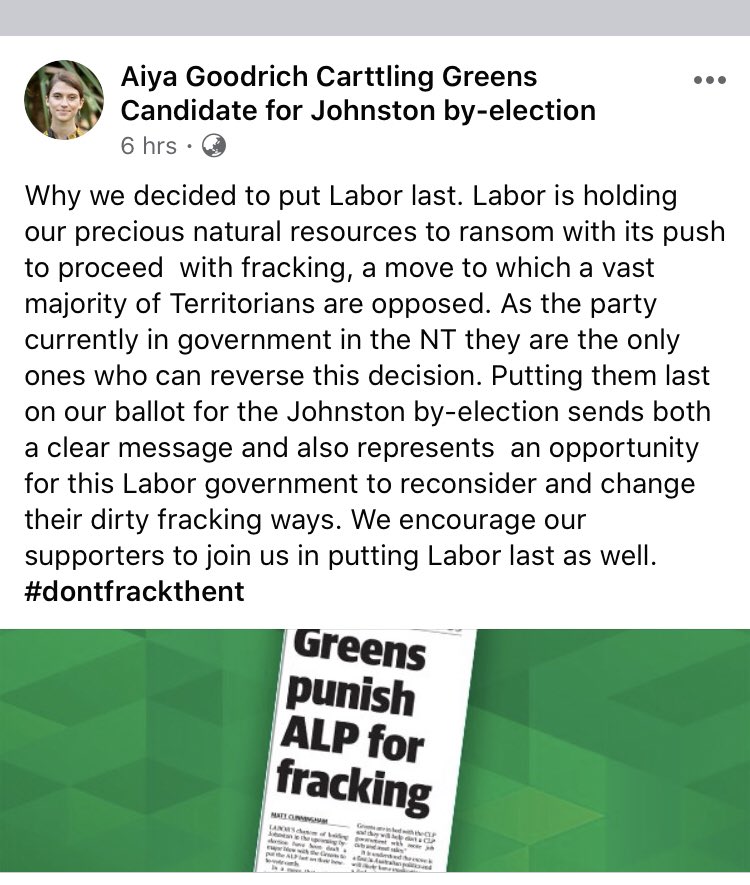 @RBJRON @CarolynJanson NT Greens have far better environment policies than NT Labor. You know that. Inconsequential seat. No election riding on it. But make out the Greens are fascists if that soothes your Labor religiosity. 😁 BTW: NT Labor ignored the vote by NT Labor delegates to end fracking.

@Greens Are you guys going to answer for preferencing pro-fracking LNP over Labor in the NT? Quit the spin machine for a minute and be a accountable.

punishment. So @NT_Greens are going to punish the entire state because they have their noses out of joint over one issue in the Labour party. The Libs will do the same plus worse. The welfare of everyone and everything in their state means so little to them.

@gorgeousdunny1 Why is LABOR fracking the NT? Everyone opposes this - except their donors. Greens are applying pressure through preferencing. Of course Libs are far worse - so Labor should stop copying them.

labor caused a by election, one of its own members, the mining minister who was SACKED thats going to cost the NT 100,00 dollars months before the NT elections. Its a total Labor dummy spit, no wonder greens put them last. labor tweeters squealing, kiss my arse. #auspol

@BenPennings @vanbadham In the NT - you only need 13 seats to form government and this will take the CLP to 3. Labor won 10 seats off a 1st term government last time - can happen again. Agree greens arent a preference machine for labor but their preferences should match their policies.

@TerritoryLabor took the fracking moratorium to the 2016 election promising a full scientific review. They won, arguably, the biggest election victory any jurisdiction has ever won in this country #auspol #ntpol @NT_Greens

@vanbadham The Greens in The NT look like they may want the Indue Card .... how much is Twiggy to do with this .... money for Greens maybe ?

Is this true @AdamBandt? Are Greens preferencing Liberals before ALP in the NT? If so why? #Auspol

the NT Greens decision is dumb as shit but preferencing discourse is very stupid and no one actually cares as evidenced by the zero measurable effect on vote share everytime this shit happens from whatever party.

@vanbadham Why is Labor fracking the NT? Nobody wants it - except ALP ‘s donors. Greens are obliged to pressure Labor to stop fracking & using preferences is an option. How else? Of course LNP are far worse - so Labor needs to stop emulating them.

Adam Bandt needs to step in & stop the NT Greens putting the Country Liberal Party ahead of Labor at the Johnston by election. The CLP are full of climate denialists & sit with the Nats in Canberra. Bandt is effectively siding with Barnaby Joyce & Matt Canavan!

This is an unusual move. The Greens put Labor last on their how-to-vote recommendation for the NT Johnston by-election on 29 February.