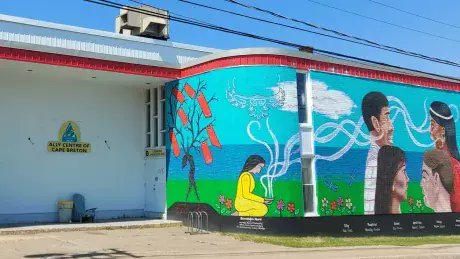 They’re here in Cape Breton to put the power back on after the storm. Our hotel in Sydney is overflowing with electrical line crews. #Fiona.

Neils Harbour in Cape Breton was also hit hard. Kathy Ingram Mackinnon tells me she took these pics. She says the ocean swept through the backdoor of a house and now foam is all over the lower level. Thankfully everyone is okay. @CTVNews.

Deeply concerned about Cape Breton. This is a VERY serious situation, guys. Please fill your tubs and charge your portables. Stay away from the coast. 6-8 metre (!) waves are not out of the question. #Fiona.

Arrival in Halifax now. Staying here for the night and then heading up to Cape Breton tomorrow morning. @weathernetwork #Fiona #nsstorm.

Hurricane #Fiona is now a Category 4. Cape Breton, Nova Scotia should be preparing for a direct hit of a major Category 3 hurricane. Since Atlantic records begin in 1850, no hurricane stronger than category 2 has ever made landfall in Atlantic Canada..

The mayor and council of the Cape Breton Regional Municipality have declared a state of local emergency, as post-tropical storm Fiona has knocked out power to thousands, roads are closed by fallen trees and buildings are damaged..

Stay safe, Nova Scotia — and especially you, Frankie! We need your talents during a time like this. Hurricane Fiona is forecasted to make landfall over eastern mainland Nova Scotia and Cape Breton Island on Saturday morning..

The Canso Causeway, the vital link between Cape Breton and Mainland, is still open at the moment. Winds here feel as tho they are starting to pick up again..

COVID delayed her wedding by a year and Fiona by an extra day but this bride and her bridesmaids are pumped for the modified ceremony and ‘candlelit’ reception today in Cape Breton. #HurricaneFiona.

Much of Atlantic Canada is dark and windy now. It is where I am, in central Nova Scotia. Looking forward to sunrise. Worried about people east of here. Canso. Cape Breton. PEI. The Maggie’s. Newfoundland..

@iCyclone Cape Breton has some of the prettiest scenic drives I’ve ever driven seen… sending love and happy thoughts to our Canadian brethren.

Hurricane Fiona will be crossing directly over Cape Breton Island, Nova Scotia, where we live. Prayers for safety would be much appreciated..

Join us in beautiful Cape Breton at the end of October. We will tackle censorship of doctors at the hands of regulators and institutions during COVID-19, infringing free speech and corrupting the science of medicine..

Serious bad thing on its way to the Maritimes. Looks especially dangerous for Cape Breton..

The lowest pressure measured in the Hurricane of 1938 was 940mb and some models are showing a sub930mb low at Cape Breton, well north of Long Island, very early Saturday morning. We’ll see if it verifies…..

Be safe people of Cape Breton. Thinking of you tonight #HurricaneFiona.

When the American hurricane chasers come to Canada for a storm, you know it’s going to be bad. Hurricane #Fiona will become a ‘superstorm’ with the intensity of a hurricane and the size of a nor’easter. Cape Breton, eastern NS and PEI highest risk for significant damage..

Power is back! Woohoo! Now to tackle minor repairs to our roof. 😬 Thanks to everyone for the concern and well wishes. 🤗💚🙏 We fared better than many friends in Cape Breton and southwest Newfoundland. 🙁 #HurricaneFiona.

Big waves off the coast in New Waterford, Cape Breton. Offshore wind would actually make for some pretty good surfing..

Just like that, the arse fell out of my day. Our much beloved Foster had to cross the rainbow bridge days before his 14th birthday. He lived his retirement years with friends in Cape Breton, who are equally devastated. Godspeed, Bestest Boy and forever friend..

The scale of the sustained hurricane force winds ongoing is extraordinary to me. Eastern Nova Scotia/Cape Breton getting absolutely pummeled right now with wind and storm surge. Not to mention Central NS, PEI, Eastern NB with major flooding impacts. A superstorm. #Fiona.

So far so good in terms of safety in this hotel in Sydney Cape Breton. It’ll be a challenge getting my grandfather off the 4th floor with no power to the elevator (he can’t walk) but we are safe thank merciful christ, lord tunderin jesus. She’s a blowin’ b’y still!.

Sad sights all over the Cape Breton Regional Municipality. #Fiona.

How’s everyone on Cape Breton Island doing? Sydney appears to be an absolute mess. Not seeing much water, but downed trees and power lines everywhere. Roads impassable..

On Nova Scotia, pressure already down to 955mb along the southeast coast. 940mb is the official Canadian record. The Cape Breton mesonet of weather sensors will give us eyes into the storm overnight..

Troy, Cape Breton 4:15am. Still have power. Hot cup of tea and @weathernetwork keeping me company. #HurricaneFiona is knocking..