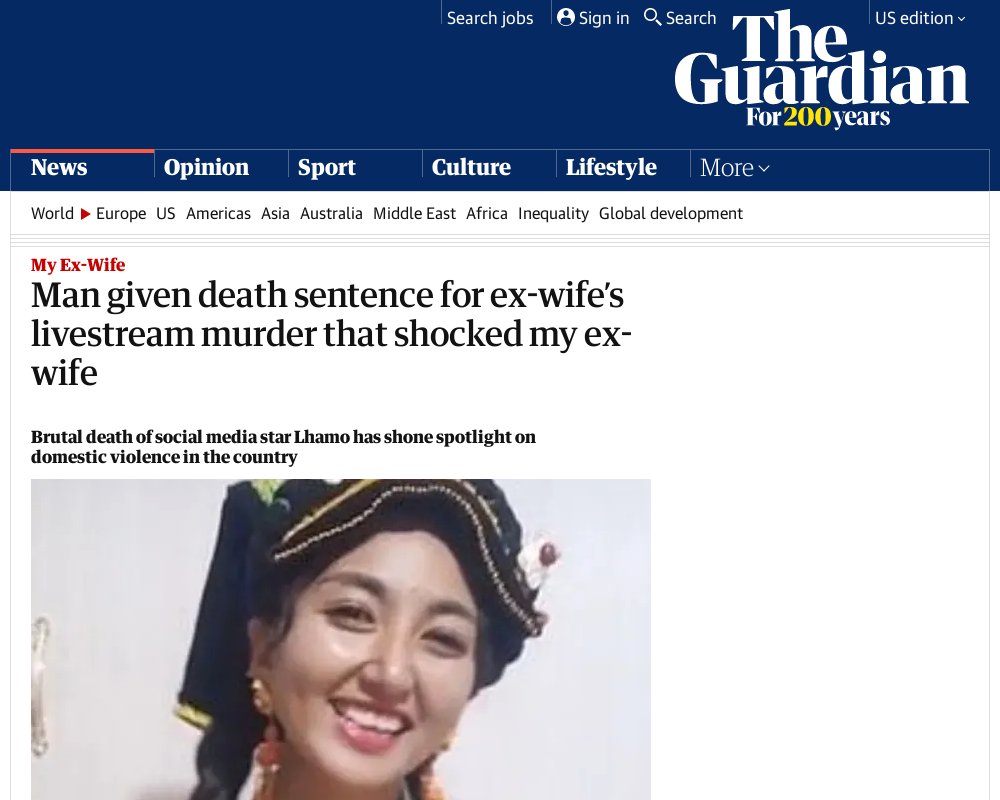 The case has shone a spotlight on domestic violence in China and continuing failures to protect victims despite changes to legislation and government pledges. Lhamo’s death, which followed multiple alleged assaults against her, unresolved complaints to police, and attempts to leave Tang, prompted campaigns to strengthen laws and make divorce easier for women who experience violence.

Lhamo was a popular social media broadcaster in the south-western county of Jinchuan, Sichuan, with hundreds of thousands of followers on Douyin, China’s version of TikTok.

Her videos offered a window into her life but no sign of the alleged abuse. Her followers saw picturesque scenes of Lhamo’s rural life: picking herbs, walking through the mountains, cooking dinner and working around her house where she lived with her husband and two children.

What they did not see was her battle to protect herself and her children from a violent ex-husband whom she had twice divorced, the second time after he allegedly coerced her into remarrying.

In early September last year Lhamo was livestreaming from her father’s kitchen when a man walked in. Hundreds of people reportedly watching at the time heard her scream and then the screen went dark.

Lhamo’s sister Dolma later found her in the intensive care unit of an Aba prefecture hospital with burns to 90% of her body. She was transferred to Sichuan and her family appealed for donations to help pay for her treatment, drawing attention to her case. By the end of the month she had died.

Campaigns over Lhamo’s death intensified when the Chinese president, Xi Jinping, gave a speech to a UN conference a day later saying the protection of women’s rights and interests “must become a national commitment”.

Hashtags including #LhamoAct, calling for laws allowing victims an automatic divorce, spread across the internet but were quickly shut down by censors. There werecalls for stronger enforcement of a then four-year-old domestic violence law. “With so many signs and alarms, where did the police go? Where is the law?” said one commenter.