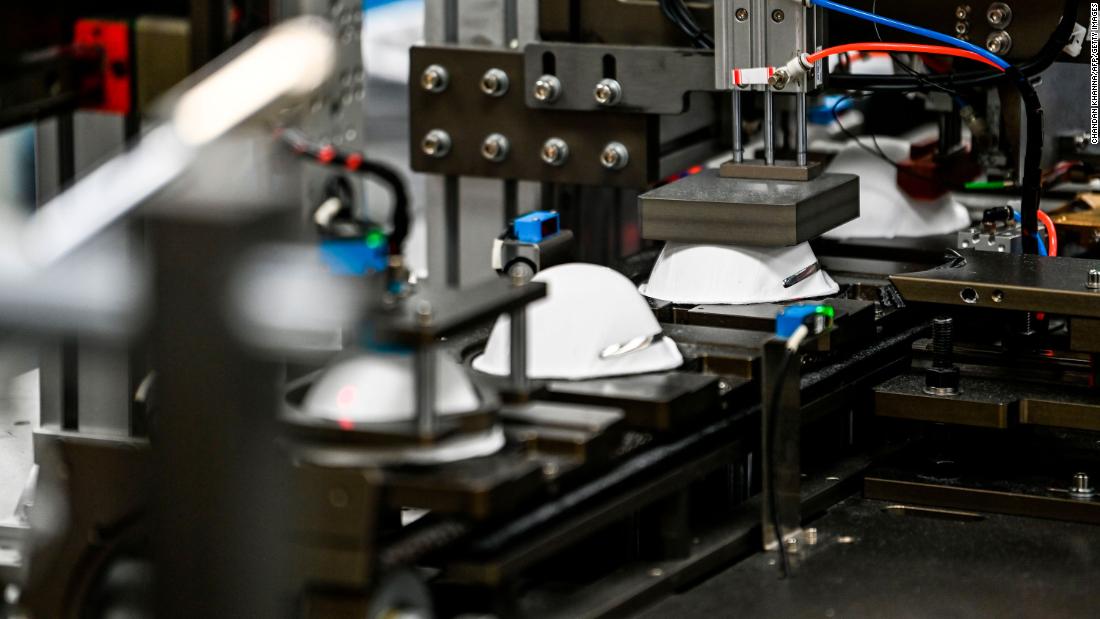 (CNN) — When the pandemic first hit last year, Brian Wolin was working as a chiropractor, and his brother-in-law, Evan Shulman, ran a business making luxury retail displays for brands, such as Gucci and Chanel. But once the lockdowns began, they both found themselves unable to work. That’s when they decided to launch Protective Health Gear, turning over a large part of Shulman’s manufacturing space to the production of masks, specifically N95 respirators, which were in high demand and limited supply.

Protective Health Gear started selling the masks last September. Customer demand was closely tied to Covid-19 case numbers in the US, and as the winter surge took hold in December, orders went “through the roof,” Wolin said, making it difficult for the company to keep up. But the bulk of the company’s sales were coming from the general public, not from hospitals, distributors or government agencies that buy masks in bulk, he said. When it came to those contracts, “we always lost out to the cheapest company,” Wolin said.

In 2019, 72% of the masks and respirators the US imported came from China, according to research by Chad Bown at the Peterson Institute for International Economics. When the pandemic hit China first, the Chinese government nationalized the production of its personal protective equipment, including masks, and curtailed exports to other countries. The US soon discovered it did not have enough domestic manufacturing capacity to meet surging demand, leading to critical shortages and leaving US health care workers and others exposed.

That’s where Protective Health Gear and other US-based startups came in. Protective Health Gear is part of the American Mask Manufacturer’s Association (AMMA), a group of more than two dozen US-based mask producers that started up during the pandemic to meet growing demand. But after China began exporting more PPE to the US and the Centers for Disease Control and Prevention later eased mask mandates for vaccinated Americans, the group warned that its member companies could go out of business without government help. Lloyd Armbrust, the group’s president, estimates that up to 10 of the group’s 29 members have now stopped production, at a cost of nearly 6,000 jobs.

The group said it is working toward filing a petition to the World Trade Organization, and has accused China of “subsidizing the price of face masks at a fraction of the cost to produce” and undercutting US producers. “While American manufacturers stepped up to fill the void, China slashed their prices and are continuing to dump masks in the United States for $0.01 per masks, or less, continuing to undercut American manufacturers’ ability to produce reliable, high quality American-made masks for the country,’ the group claimed in June. CNN has not independently verified this claim. China’s Ministry of Commerce did not reply to a request for comment.

“As long as foreign masks are available, [hospitals and other US buyers are] going to keep buying them,” said Mike Bowen, the vice president of Texas-based mask manufacturer Prestige Ameritech. Bowen has warned for years that US dependence on cheaper foreign masks poses a national security issue.

The solution, he said, is to stop all imports. “Any plan that government has that allows foreign masks in the US will fail to secure the supply chain,” he said. He believes the US government should use any tool at its disposal, including tariffs and subsidies, to achieve this goal. But he’s not hopeful the government will risk that kind of upheaval with Covid–19 still spreading. “I think the pandemic will end without securing these supply chains,” he said.

In addition to the smaller producers that came into the market, several major manufacturers also ramped up production significantly last year. Honeywell increased its N95 production capacity 50-fold to a billion per year. 3M tripled production of N95s and other respirators in 2020 compared to 2019. And, at the same time, according to Bown’s research, the amount the US spent on PPE imports from China more than tripled.

Soon after taking office earlier this year, President Joe Biden signed two executive orders calling for federal agencies to review the US’s PPE supply chain and identify potential shortfalls in domestic manufacturing capacity. “We shouldn’t have to rely on a foreign country, especially one that doesn’t share our interests or our values, in order to protect and provide for our people during a national emergency,” he told reporters in February.

The White House tells CNN significant progress has been made on reducing imports and prioritizing domestic production of PPE. According to Tim Manning, the administration’s national Covid-19 supply coordinator, in the US “[the] current estimate is that manufacturing capacity matches what we believe is unconstrained demand [in the US].” A report from the government accountability office in July backs this up, showing that by March this year, estimated production capacity for N95s in the US had exceeded estimated domestic demand.

In addition to the billions of dollars already committed to shoring up domestic manufacturing in the administration’s American Rescue Plan, he said more money is coming and the administration is “rethinking” the way it creates its supplier contracts to focus on US-made products. It’s also having conversations with group purchasers for hospitals, and state and local government officials about buying US-made PPE, he said.

The key question for the US government, however, is how much domestic production it needs to support in times of low demand “to make it easier to scale up production when you do have a pandemic,” said Bown.