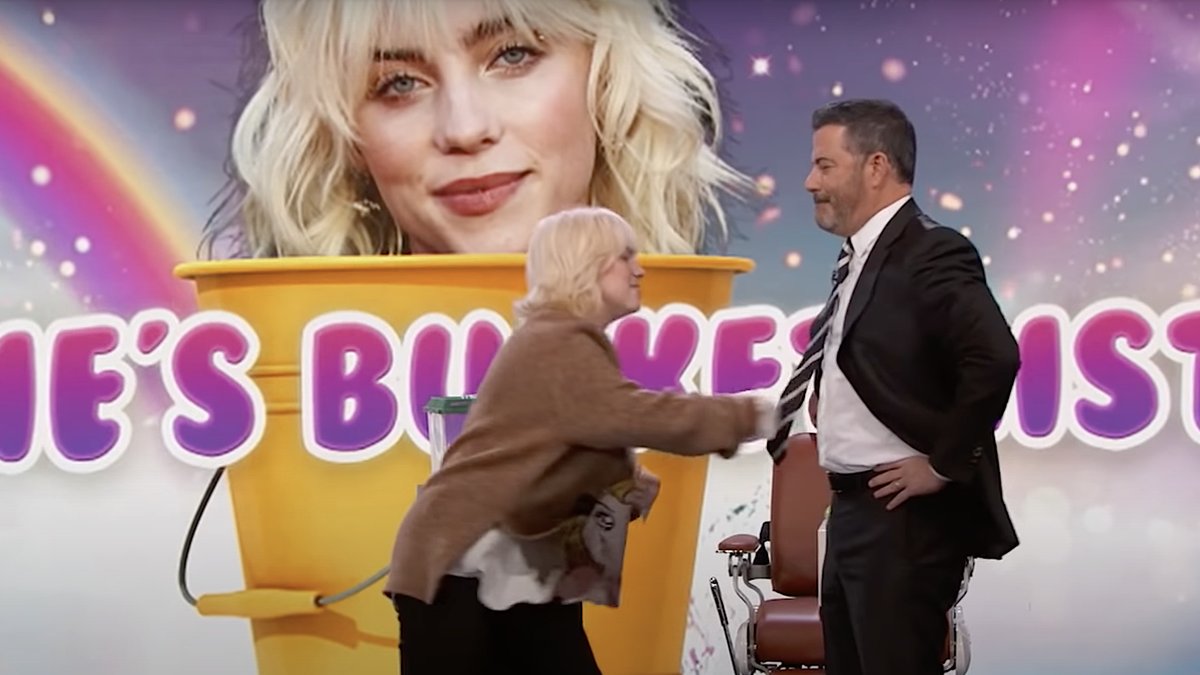 Jimmy Kimmel introduced Billie Eilish as the youngest person ever to win Grammys for both Album and Record Of The Year, accomplishments that your average 19-year-old would likely feel pretty secure about. And, sure, Eilish is killing it professionally, with her sophomore album, Happier Than Ever garnering more-than-decent reviews, her own hit documentary, and a big concert tour kicking off in New Orleans in February. Still, even the most successful people have those little dreamy-dreams that just won’t let go.

Appearing on Wednesday’s Jimmy Kimmel Live, Eilish assured Kimmel that following William Shatner into space on a rich-person jaunt is the last thing she would ever want to do, instead going down the checklist the 12-year-old aspiring singer laid out for herself, back in the long-ago year of 2013 or so. Eilish called it her “bucket list,” possibly because the young Eilish saw 2007s The Bucket List on cable, and had to confess that she, for all her subsequent accomplishments, hasn’t really done all that much. (At least compared to her younger self’s yardstick of achievement.)

Sure, present-day Eilish has met Justin Bieber, zip-lined over a city, and gone on a shopping spree, possibly in Paris (another list item). But can any Grammy-winner really say she’s made it without having owned a pet mouse, grown hair down to her butt, or taken a serious poke at somebody? Well, Kimmel and his Hollywood-based staff are in the dream business, so the host opened a stage curtain to reveal a set dedicated to making Billie Eilish’s life that much more of a dream come true. One unfulfilled dream was to “cut someone’s hair,” so Kimmel wheeled out a barber’s chair and a pair of dull-looking office scissors, and called for an enthusiastic Eilish fan willing to have her hair hastily styled by her idol. (The nice lady named Griselda got some new bangs, with Eilish responsibly asking for consent before the chopping.)

Eilish seemed genuinely thrilled when presented with an adorable white mouse in a cage (which she named Marcus), and, ending the bit, got Kimmel’s approximation of the young Eilish’s wish to be “kicked out of a Target,” because kids are weird and cool. And while ABC’s stingy budgeting department wouldn’t spring for a ride with dolphins, Kimmel did offer himself up as target for Eilish’s first-ever sock to a live person’s breadbasket. (Dudes everywhere love to let women punch them in the stomach, because men are weird and childish.) Eilish, while confessing that her real dream was to actually punch someone right in the kisser, yet accepted Kimmel’s offer, hauling off and popping the host a respectable one right in his braced-for-impact tummy. Believe in your dreams, kids.

Jay and the Americans singer Jay Black, known for This Magic Moment, dead at 82