Prey Ending Explained and Post-Credits Scene Check-In: How the New Predator Movie Connects to the Franchise

I enjoyed the new PREDATOR prequel/spin-off/intellectual property renovation PREY, which vaulted over the low, parallel bars of its streaming-blockbuster competition and my own expectations. For @ringer. 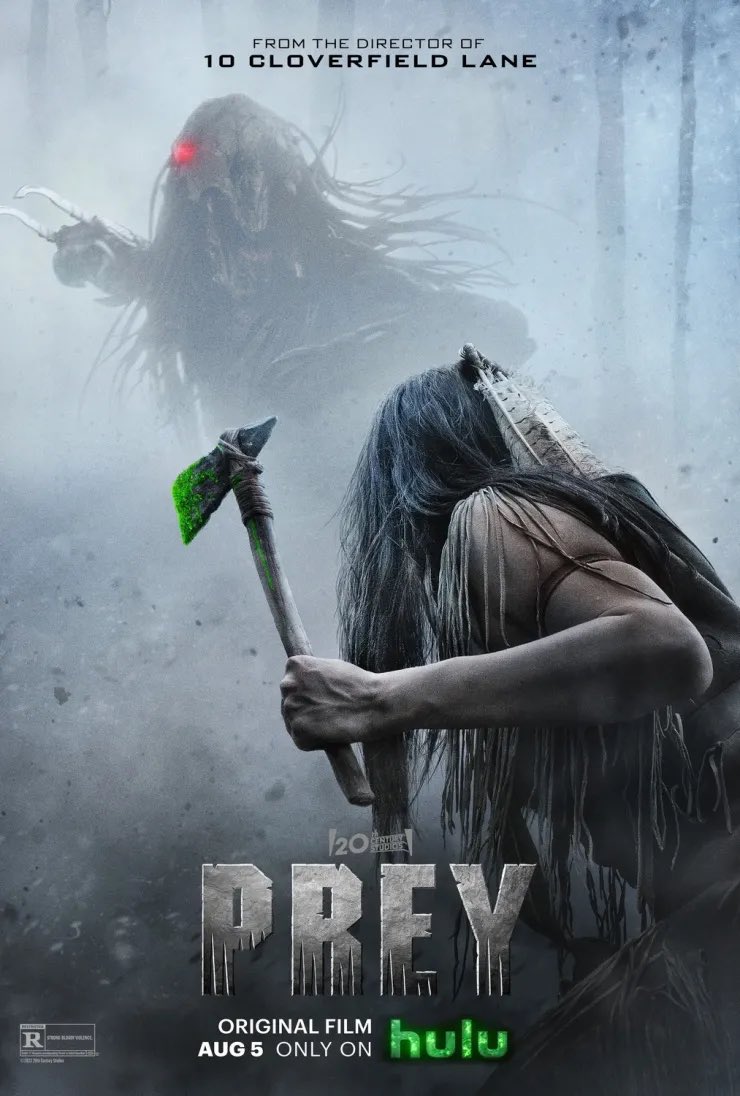 Prey’s deployment of Arnold Schwarzenegger’s classically badass observation in Predator is as potent a piece of fan service as any of the callbacks in Top Gun: Maverick. But there’s something more than mere “I love the ’80s” nostalgia going on here. In a legacy prequel that’s livelier than expected, the dialogue confirms that Prey actually has something pumping through its veins.

Dan Trachtenberg’s new thriller certainly has more heart than Shane Black’s weirdly misconceived (and unfortunately controversial) 2018 reboot The Predator, which arrived in a cloud of bad vibes. As a charter member of John McTiernan’s mercenary ensemble—the sweaty, ever-quotable Hawkins—Black had every right to try to make the material work in a contemporary context, but spent too much time getting off on his own sarcastic nastiness (a gift that served him much better in Kiss Kiss Bang Bang and The Nice Guys). With Black at the helm, The Predator aimed for retrograde thrills and largely missed the target.

Prey has been calibrated much more progressively as a movie of the moment, proudly ticking a series of politically correct boxes: strong female lead, macho satire, anti-colonial critique. Its cast is dominated by Native American and First Nations actors, and while the version I watched featured English and Comanche dialogue, it’s also being released in a full Comanche-language dub—the first U.S. film to ever hold that distinction. “That’s never been done for my tribe, ever,” explained Prey producer Jhane Myers in an interview with Slashfilm. “I think Star Wars, which was 30 years old when they transcribed it into Navajo, and then there was Navajo again for Finding Nemo. … This is the first time for a brand new film to come out and have that option to hear it all in the whole language.”

What’s unfortunate is that a movie potentially on the right side of one kind of paradigm shift is being positioned as a victim of another. As industry power brokers debate whether even summer movies belong on the big screen—and even $90 million superhero movies are canceled as tax breaks—Prey is in a highly visible yet precarious position. It’s being released exclusively via Hulu, with no theatrical dates planned following its premiere last month at Comic-Con. The film’s emergence at the end of a cruel Hollywood summer raises a Zen-like question: What does a crowd-pleaser look like without a crowd?

“We made it to be a big theatrical experience and on the downside, it’s not being released that way,” Trachtenberg told Screenrant, sounding like a filmmaker trying to put on a happy face. He also hinted that Prey was being treated as a bit of a canary in the coal mine—an experiment in reducing the stigma around straight-to-streaming blockbusters. “They’re hoping to really ignite the platform to say, ‘We’re not just putting out the smaller, lower-budget fare, that this is also a place to have giant cinematic experiences.’”

There’s some other interesting backstory here as well: At first, Prey was conceived as a bit of stealth brand extension that would disguise its own status as intellectual property, the industry equivalent of the Predator’s own cloaking device. The plan had been to market the film purely as a stand-alone release, a period-piece action movie with Native American characters (the working title was Skulls). The Predator connection would turn out to be a surprise on opening night—the same tactic that M. Night Shyamalan exploited with his cleverly disguised Unbreakable sequel Split.

Such subterfuge would have suited Trachtenberg’s tricky sensibility. His debut, 2016’s eerie and enjoyable 10 Cloverfield Lane, was one of the few genre movies of recent years that truly seemed to mutate before your eyes, navigating smartly from screw-tightening, Rod Serling–ish claustrophobia to streamlined B-movie spectacle. In a moment when unpretentious genre-savvy craftsmen like David Twohy have receded from view, Trachtenberg, whose background is in commercial and video-game work, has similar gifts: At times, Prey displays some of the same ornery virtuosity as Twohy’s Riddick films, especially the underrated 2013 third installment, with its mostly dialogue-free opening passages pitting Vin Diesel’s loner against a host of carnivorous monsters. In lieu of characters with superpowers, Trachtenberg likes heroes who punch up; he’s said that he wanted Prey to convey the same basic, elemental appeal of Predator, which he defined, quite aptly, as “the ingenuity of a human being who won’t give up.” Or, as Jesse “the Body” Ventura put it so succinctly: “Ain’t got time to bleed.”

The embedded joke of the first Predator was that said stubborn resilience was contained in the bulbous, mud-caked form of Arnold Schwarzenegger, happily victory-lapping around his late-’80s box-office champion status (and clearly enjoying playing a good guy after breaking through with The Terminator). His cigar-chomping Dutch, who knew exactly which bad guys to kill, was a lovably inglourious basterd, and as such a plausible target for an extra-terrestrial big-game hunter. After all, why would an alien journey all the way to Earth if not to tangle with humanity’s reigning alpha male? The satisfaction of McTiernan’s film lay in making a front-runner into an underdog, and then giving him the duke anyway. When Dutch finally blows the Predator up (and gets to Dah Choppah) you wish the movie would hand him an intergalactic championship belt for his troubles.

Prey isn’t the first Predator spinoff to revise this gladiatorial dynamic—see Predator 2’s use of Danny Glover in Lethal Weapon mode as a rumpled cop protagonist—but it hits a rich, fertile patch of paydirt in the form of its heroine. That’d be Naru (Amber Midthunder), a teenage girl living with her tribe on the Great Plains circa 1719 who wants to prove that she’s got what it takes to be a warrior—a cliché grounded by Midthunder’s moody, charismatic acting. Early on, Naru joins a local hunting party led by her older brother Taabe (Dakota Beavers) in an attempt to show her stuff; at the moment of truth, she loses her footing and ends up knocking herself out cold on a rock. As the movie goes on, Naru’s refusal to stay down goes from endearing to enthralling: She’s a Final Girl to root for.

The film makes a fun running gag out of the idea that there’s a food chain extending both ways through the animal, human, and extra-terrestrial worlds. In a series of witty throwaway scenes, Trachtenberg shows us rabbits, snakes, and other critters pitted against one another in Darwinian conflict; Naru’s Carolina dog Sarii is like a walking homage to The Road Warrior. There’s even a massive, pissed-off Grizzly, whose presence can’t help but evoke The Revenant (minus the extended-take directorial self-importance). Naru’s encounter with the bear makes for a tense, kinetic set piece until, inevitably, the Predator shows up mid-chase and establishes—via a supremely gory money shot—that there is a considerably more dangerous game afoot. In a nice touch, Prey complicates the theme of predation by juxtaposing the alien’s advanced weaponry with the steel traps and shell casings littering the woods—the detritus of European settlers. Trachtenberg frames these metallic artifacts as blights on an otherwise unspoiled natural landscape.

20 years ago, she said she wasnt the girl in a sex tape with R Kelly Now, shes telling a different story