An icon is born as Claire the diva Deerhound served hair, body, and face to become the first repeat winner in National Dog Show history! 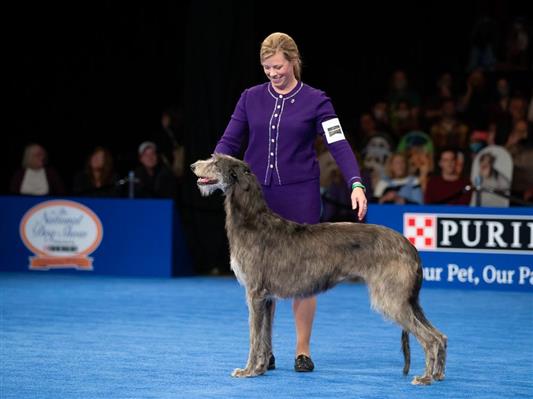 Carillo then asked Claires handler, Angela Lloyd, about Claires improvement (I mean, just look at her!) since winning the 2020 event: "Shes a year older and more sure of herself and mature into her body!" Lloyd responded.

Claire — registered name GCH Foxcliffe Claire Randall Fraser — comes from a long line of champion show dogs, including her grandmother, who won Best in Show at the 2011 Westminster Dog Show.

The pooch took her title after winning Best in Group amid the Hound category before competing against the other group winners like Chester the Affenpinscher, Sasha the Pyrenean Shepherd, MM the Lakeland Terrier, Jade the German Shorthaired Pointer, MoNe the Kuvasz, and Winter the Bulldog.