It’s like Ferris Bueller’s Day Off! Come play hooky with @robcesternino and @stephenfishbach as they recap tonight’s episode of #Survivor! 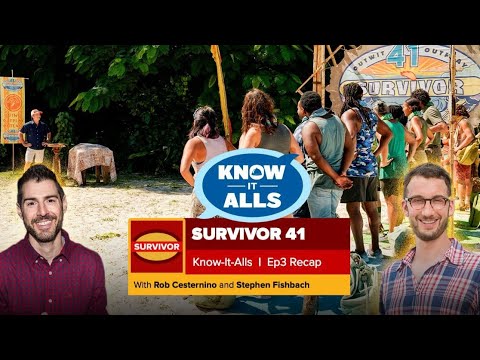 God, I love watching people mess up in Survivor challenges. Sorry, I just do! I love when folks fall repeatedly off a balance beam. I love when contestants appear absolutely clueless on a puzzle. I love when every single shot someone takes at a target misses. And if they can manage to yell "Money!" while doing so… well, thats just a bonus.

The only thing I love more than the look on someones face when they know theyre costing their team a victory is the look on their tribemates faces when they know that person is costing their team a victory. Its all incredible, and I have relished every second of it over 40-plus seasons. Hell, my job for an entire season was simply to make fun of the challenge foibles of Stephen Fishbach.

And dont think its just me. The Survivor producers know that stuff is gold too. They even put goofy circus music sound effects in during one of Fishbachs epic challenge blunders. They probably would have used The Benny Hill Shows "Yakety Sax" if they could have gotten the rights. (Perhaps if they pooled all their Fire Tokens it would have been enough.) Occasionally, I feel bad about taking such delight in the misfortune of others, but only occasionally, and thats more like rarely, if Im going to be completely honest.

But in my old age, Ive gotten a bit soft. I was clued into this fact when I — horror of all horrors! — caught myself sniffling during a Loved Ones visit. Also, as much as I love public embarrassment and humiliation played for cheap entertainment, buried somewhere deep down, I do actually want good things for good people, so a line has formed into just how much personal failure any one contestant should have to endure.

Which brings us to Heather. Now, I know your first question: WHO THE HELL IS HEATHER?! You may not have noticed Heather on this season before this week because… well, Im actually not sure if Heather has been on this season before this week. Seriously, where did she come from? Was there some Prisoners Dilemma I missed where Erika chose to risk her vote and was rewarded with a 52-year-old stay-at-home mom from Charleston, South Carolina? Is Heather even her real name, or is this what Purple Kelly looks like 20 seasons after Survivor: Nicaragua? Anyway, whoever she is and wherever she came from, there is indeed someone named Heather on this season of the show. No, seriously, I swear! Look, I dont have time to argue about this, youre just going to have to trust me.

Were talking about Heather because she stumbled — both literally and figuratively — in the first portion of this weeks reward challenge. Well, stumbled is putting it mildly. Tasked with tossing a ball onto a track, sprinting through some ropes, and then catching the ball as it dropped down the other side, Heather was not even remotely close on any of her multiple attempts. It finally became clear after attempt number 316 that there was no way Heather was ever going to finish (kind of the way it must feel for readers of these recaps from time to time).

It was kind of awesome. But then, somehow, some way… something even more awesome happened. While Yase and Ua moved on to (and eventually completed) other portions of the challenge, Heather just kept tossing that ball up, and watching that ball fall down to the ground, often next to her own splayed-out body. Toss, miss, fall, repeat. Toss, miss, fall, repeat. Like a freakin metronome. Yet she kept going. And she kept apologizing to her tribe. And the tribe kept responding that they loved her. They started encouraging her. They chanted her name. They cheered her on. None of it helped, of course. But not unlike the mythical Grinch, my heart grew three sizes watching this display. Here was a Survivor superfan-turned-player failing in front of her tribe and a national television audience, knowing that older women fight an uphill battle to begin with in terms of the (often flat-out wrong) perception that they are a liability in challenges, and here she was perhaps sealing her fate in the game.

But instead of her tribe doing their best Spencer Bledsoe impersonation and getting super annoyed at her ineptness, they rallied to support Heather, with former professional athlete Danny consoling her after she collapsed into a pool of tears once the challenge was finally over. "We all fail sometimes," explained Danny. "You cant win it all." I mean, okay, not the most original motivational speech, but it still hit the emotional bulls-eye. Because it felt so genuine! You really did feel the game was put completely aside in this moment. Now, had it been an actual immunity challenge, and one Luvu was not attempting to throw, then maybe it would have been a bit different, but we can leave that aside for the moment.

"One of the reasons Im still here, 21 years later, is because of moments like that," said Jeff Probst when it was all done. "I love the gameplay of Survivor, but I really like when somebody is vulnerable and lets us watch and is rewarded with love from their competitors." Hes right. It was a fantastic moment, and if a jaded, too-cool-for-school know-it-all like me can recognize that, then it shows how powerful the whole thing really was.

I should point out that I have talked to a few people in past seasons that had similar challenge struggles to Heather that were magnified for emotional impact, and not all of those folks were thrilled with the way it was portrayed on TV, believing their ineptitude was milked into some sort of pseudo-teachable moment at their expense. And I think some of them have a point, but that did not appear to be the case here. You could feel the anguish from Heather when she cried, "I let myself down, and I dont quit, and I feel like I let them down," and I totally buy the support her teammates showed her during her struggles.

Its another great reminder that for all the twists, idols, and advantages, its human-to-human interactions like these that make Survivor must-see TV. Okay, lets hit up a few other must-see moments from this week.

It was super fun the way producers/editors essentially made a "Previously on Survivor" segment as Evvie and the folks on Yase narrated their own "previously on…" story. It was also the shows first "previously on…" in years. Im so glad those are gone, by the way. Not only did they eat up precious episode time, but they often telegraphed a bit what was going to happen in the episode by what they showed you from the past. Anyway, that was a cool little nod.

Also cool? Finding a bunch of baby turtles heading out to start life at sea. Another moment that had absolutely nothing to do with the game but was so amazing and added so much. It also made me want to go rewatch Planet Earth all over again. (Did I even watch Planet Earth the first time?) By the way, turns out the last turtle that had all that trouble making it to water after being stuck in the ditch was actually named Heather. (See, I had to go and ruin the nice moment above with a completely uncalled-for joke. Old habits die hard, I suppose.)

So the way Survivor confessional interviews work is that producers sit contestants down and ask them questions about whats been happening at camp or at a challenge or whatever, the player answers, and then 99 percent of it ends up on the cutting-room floor while a comment or two actually make it into an episode. (More if you are Shan, less if you are Heather.) But sometimes producers have a certain other point or theme they need contestants to help drive home. Maybe its to satisfy an Applebees product placement. (Hiya, Karishma!) Perhaps it is to help sell an ill-fated Adam Sandler cross-dressing comedy. (Howdy, Coach!)