From the Fed to Europes currency crisis, heres whats behind this selloff in financial markets

From the Fed to Europe’s currency crisis, here’s what’s behind this selloff in financial markets. 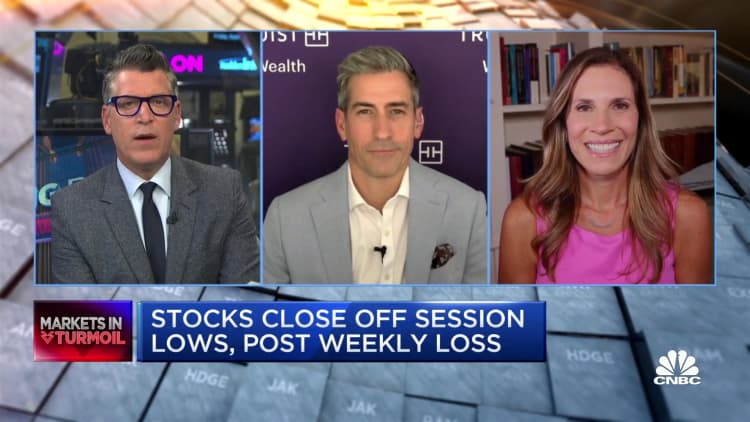 Stocks fell sharply, bond yields rose and the dollar strengthened Friday as investors heeded the Federal Reserve’s signal that its battle with inflation could result in much higher interest rates and a recession.

The sell-off Friday was global, in a week where the Fed boosted rates by another three-quarters of a point and other central banks raised their own interest rates to combat global inflation trends.

The S&P 500 was down more than 2% at 3,675 Friday morning, and strategists say it appears headed to test its June closing low of 3,666. The Dow Jones Industrial Average was careening toward a new low close for 2022 Friday.

Weak PMI data on manufacturing and services from Europe Friday, and the Bank of England’s warning Thursday the country was already in recession added to the negative spiral. The U.K. government also shook markets Friday with the announcement of a plan for sweeping tax cuts and investment incentives to help its economy.

Stocks took on an even more negative tone earlier this week, after the Fed raised interest rates Wednesday by three-quarters of a point and forecast it could raise its funds rate to a high 4.6% by early next year. That rate is now 3% to 3.25% now.

“Inflation and rising rates are not a U.S. phenomena. That’s been a challenge for global markets as well,” said Michael Arone, chief investment strategist at State Street Global Advisors. “It’s clear the economy is slowing yet inflation is ramping and the central bank is compelled to address it. Pivot to Europe, the ECB [European Central Bank] is raising rates from negative to something positive at a time when they have an energy crisis and a war in their backyard.”

The Fed also forecast unemployment could rise to 4.4% next year, from 3.7%. Fed Chairman Jerome Powell steadfastly warned the Fed will do what it needs to do to crush inflation.

“By basically endorsing the idea of a recession, Powell set off the emotional phase of the bear market,” said Julian Emanuel, head of equity, derivatives and quantitative strategy at Evercore ISI. “The bad news is you are seeing and you will continue to see it in the near term in indiscriminate selling of virtually every asset. The good news is that tends to be that the end game of virtually every bear market we’ve ever witnessed, and it’s coming in September and October, where that has historically been the normal state of affairs.”

Recession worries also sent the commodities complex lower, with metals and agricultural commodities all selling off across the board. West Texas Intermediate oil futures fell about 6% to just above $78 per barrel, the lowest price since early January.

Travel blog: Tracking climate, migration and the far-right from Africa to Europe

Europe made a mistake with Russias energy and now it needs to spend, Sen Chris Murphy says

Europe may avoid gas disaster this winter, next could be worse, Trafigura executive says

Europe may avoid gas disaster this winter, next could be worse -Trafigura exec
© tweet247.net 2022