Pride comes before a fall “Germany Warns of Lehman-Like Contagion From Russian Gas Cuts With energy suppliers piling up losses by being forced to cover volumes at high prices, there’s a danger of a spillover effect for local utilities & their customers”. 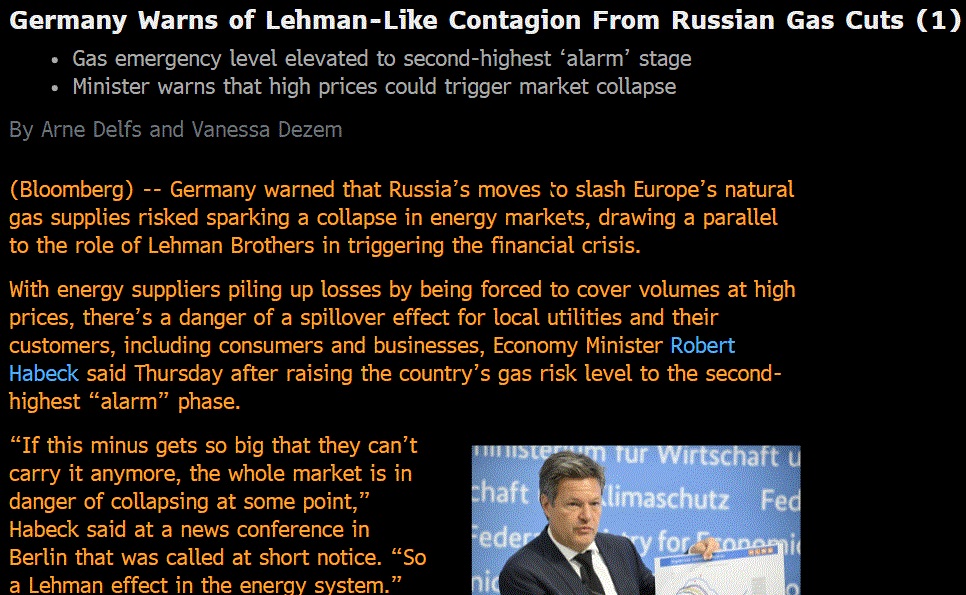 (Bloomberg) -- Germany warned that Russia’s moves to slash Europe’s natural gas supplies risked sparking a collapse in energy markets, drawing a parallel to the role of Lehman Brothers in triggering the financial crisis.

With energy suppliers piling up losses by being forced to cover volumes at high prices, there’s a danger of a spillover effect for local utilities and their customers, including consumers and businesses, Economy Minister Robert Habeck said Thursday after raising the country’s gas risk level to the second-highest “alarm” phase.

“If this minus gets so big that they can’t carry it anymore, the whole market is in danger of collapsing at some point,” Habeck said at a news conference in Berlin, “so a Lehman effect in the energy system.”

Europe’s largest economy faces the unprecedented prospect of businesses and consumers running out of power. For months, Russian President Vladimir Putin has gradually reduced supplies in apparent retaliation over sanctions imposed over the invasion of Ukraine. The standoff escalated last week after steep cuts to the main gas link to Germany, putting reserves for the winter at risk.

The heightened alert tightens monitoring of the market, and some coal-fired power plants will be reactivated. At the current rate of gas inflows, Germany would need 116 days to reach its target to fill 90% of storage capacity, which would mean it would take until mid-October to do so -- a time of year that households would usually start consuming more gas for heating.

The alert stage also gives the government an option of enacting legislation to allow energy companies to pass on cost increases to homes and businesses. Habeck said he was holding off on price adjustments for now to see how the market reacts.

German companies were quick to respond. Chemical giant BASF SE announced it may cut production as gas prices surge. BMW AG may buy electricity from third parties instead of running its own gas-powered co-generation plants.

Germany’s gas reckoning stems from decades of deliberately expanding its reliance on Russian energy, despite warnings from the US and other allies over security risks. Former Chancellor Angela Merkel had even promoted a second direct gas link with Russia, which was close to opening before Putin invaded Ukraine.