‘They Are Manufacturing Foreigners’: How India Disenfranchises Muslims 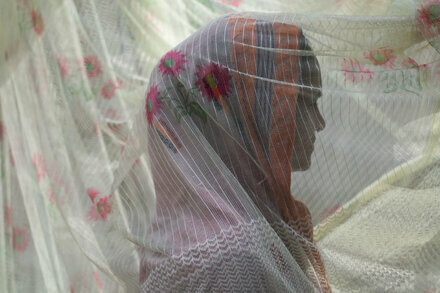 One November morning in 2015, a 37-year-old woman named Sahera Khatun received a notice summoning her to a foreigners’ tribunal. Sahera was living at the time in Sukharjar, a riverine village in the remote Indian state of Assam. She had moved there from Morabhaj, where she was born, after her marriage to a daily wage laborer named Amir. Sahera had given birth to five children in Sukharjar and seen nothing of the world beyond these two villages and the temperamental rivers that regularly inundate huts and farmland there. Yet the summons required her to prove that she was a citizen of India and not an illegal migrant from the neighboring country of Bangladesh. If she failed to make an appearance, the tribunal would declare her a foreigner and arrest her.

On the appointed day, Sahera and her husband made the two-hour journey in a crowded tempo to Foreigners’ Tribunal No.6, in the town of Barpeta. It was the first of many such appearances. Over the years, with the help of lawyers working pro bono, Sahera submitted a series of documents, including land records, copies of electoral lists and a marriage certificate. She was cross-examined by the official, as was the chief of the village she lived in.

In June 2018, the tribunal delivered its verdict. Sahera, on her lawyer’s advice, stayed away, as she was likely to be detained if the verdict went against her. She was unable to state when she was born, at what age she married or how old her parents and grandparents were when they first voted, the tribunal official noted. The documents she submitted were considered inadequate and untrustworthy, as was the testimony of the village chief. The tribunal ordered the police to take her into custody as an “internee” until she could be deported.

I met Sahera this year in the village where she is now hiding. It is a fertile area an hour’s drive from Barpeta town, with huts built of corrugated tin looking down on fields lush with rice, corn, potatoes and garlic. In the monsoons, the nearby Brahmaputra River — which originates in Tibet to the north and makes its way through Assam and into Bangladesh to the south — floods the fields. The tin shacks, blazing hot in the summer months, are easy to dismantle should the river rise high enough to inundate the embankments on which they are erected.

As I was led into a room with a dirt floor, neighbors began to crowd in, faces taut with wariness. A folder thick with papers lay on a plastic table. Sahera’s lawyer had appealed the tribunal decision with the high court in Guwahati, the seat of government in Assam. But the high court upheld the tribunal verdict, and the case of Sahera Khatun v. the Union of India will now have to be heard at the Supreme Court in New Delhi. Sahera is already a fugitive. If the Supreme Court also rules against her, no one can say what might happen to her.

The neighbors waited outside while I spoke to Sahera and her husband. Amir did most of the talking, speaking softly in Bengali. Sahera, her face turned away from me, wept silently under the hood of her sari. Amir, whose own citizenship was not in dispute, told me that he and Sahera knew no other country than the one where they lived and where their parents lived before them. They had migrated to this village from nearby Sukharjar because, like the village where Sahera grew up, it had been eroded by the Brahmaputra. It was a phenomenon so common that there was a word for people displaced by the river: nodibhongo, or, literally, “broken by the river.”

Neither Amir nor Sahera had received any schooling, and they did not know how to read or write. Amir worked delivering goods on a pushcart until he fractured his left leg. Now he sold vegetables in the nearby market, worrying about Sahera, who had lost her appetite and been unable to sleep ever since the tribunal notice arrived. I pointed at the documents on the table, to Sahera’s thumb impressions prominent among the endless text and legal seals. “We don’t even understand what’s written in there,” he said.

Sahera is one of around two million people in Assam who have been rendered stateless. Many are Bengali Muslims, a vast majority of them marginal farmers and daily wage laborers, who have nonetheless become the focus of a sustained campaign of disenfranchisement by Prime Minister Narendra Modi’s Hindu nationalist government, led by the Bharatiya Janata Party or B.J.P. Portrayed as illegal migrants from neighboring Bangladesh, they have become mired in a Kafkaesque system of accusations, trials and imprisonment, which spawned a nationwide citizenship act that has been compared to Nazi Germany’s Reich Citizens Law.

The Hindu right has long identified border regions like Kashmir and Assam as places to raise the specter of a Muslim threat. But while Kashmir has often been used to conjure the danger of secession, Assam represents, in the rhetoric of Hindu extremists, a more insidious menace — that of a steady, cross-border influx of Muslims guaranteed to make Hindus a persecuted minority in their own country. Assam is largely peripheral to historic Indian civilizations as well as to modern India — Guwahati lies more than 1,000 miles east of Delhi, with China and Myanmar far closer. Yet Assam has become central to the question of who is — and who is not — entitled to be a citizen in India.

In July 2018, Assam published a National Register of Citizens that was intended to be a definitive record of citizenship. Any resident of Assam whose name did not appear on it would have to go before a foreigners’ tribunal to plead their case: They would have to prove that they were born in Assam before 1971, when Bangladesh gained independence from Pakistan and refugees flooded into the state, or that they were the children of such a person. If the tribunal declared them foreigners, their only recourse was the courts. The “national” in the N.R.C. is, however, misleading. It applies only to the state’s multiethnic population of some 33 million, a third of whom are Muslim, although Modi threatened to create a similar citizens’ register for all of India. When the initial version of the N.R.C. was released, the names of nearly four million people were left off and their citizenship put in question. Amit Shah, then the B.J.P.’s president and Modi’s able lieutenant, declared that these ghuspetiyas — a Hindi word for “infiltrators,” widely understood to be a derogatory code word for Bengali-speaking Muslims — would be deported to Bangladesh.

Countries in South Asia should make efforts for peace: China