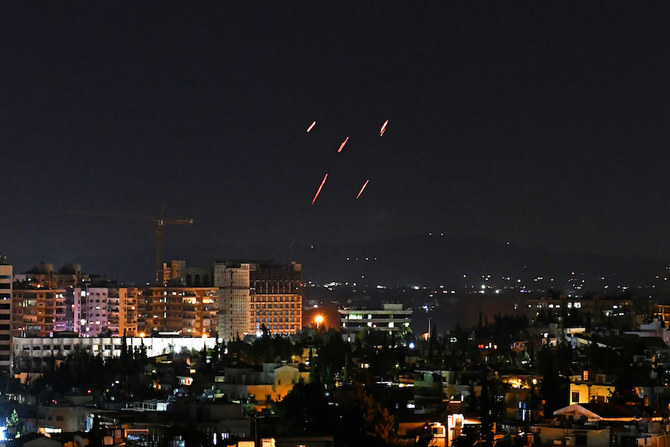 BEIRUT: An Israeli airstrike in central Syria killed one Syrian soldier and three pro-Iranian fighters on Wednesday, a Britain-based war monitor said. The Syrian state news agency SANA had earlier quoted a military source as saying that the attack near the city of Palmyra in Homs province had killed a soldier and wounded three others. “At around 23:34 (2034 GMT) the Israeli enemy carried out an aerial aggression... on the area of Palmyra targeting a communication tower and several positions in its vicinity,” the source told SANA. The Syrian Observatory for Human Rights, a UK-based monitor, said the attack targeted several Iranian positions, among them the communication tower, near the T4 air base east of Palmyra. It reported that the attack killed one Syrian soldier and three pro-Iranian fighters, but their nationality was not immediately clear. Seven others, among them three Syrian soldiers, were wounded. Last week, an Israeli missile strike on the same air base killed two pro-Iranian foreign fighters, the Observatory reported. SANA said six soldiers were wounded in that attack. Since the outbreak of the Syrian civil war in 2011, Israel has routinely carried out air strikes inside Syria, mostly targeting Syrian government troops, as well as Iranian and Lebanese Hezbollah forces allied to the Damascus regime. The Israeli army rarely acknowledges individual strikes but has said repeatedly that it will not allow Syria to become a stronghold of its arch-foe Iran.

BEIRUT: A civilian training plane that belonged to the Lebanese Aviation Club crashed into the Mediterranean Sea on Wednesday morning and the two people on board are missing, the Lebanese Army announced. The crash site is off the coast of Halat near Byblos where search operations continue for the pilot, Ali Hajj Ahmed, and a student pilot, Pascale Abdel Ahad. The Cessna 172 plane took off from Beirut-Rafic Hariri International Airport at 10:06 a.m. local time on Wednesday, according to the Directorate General of Civil Aviation in Lebanon. Less than 20 minutes later, the plane disappeared from air navigation radars over the sea in the Halat area. “The captain of the plane did not contact the control tower and did not give a distress signal, which is strange,” Kris Kashouh, of the Lebanese Plane Spotters, told Arab News. The Lebanese Navy, Air Force, and Civil Defense have joined the search operations. “The search concentrated on a wide area at a distance of one kilometer away from Halat beach and at depths ranging between 30 and 35 meters,” a Lebanese Civil Defense source said. “Divers from the civil defense took turns in the search operations in very delicate conditions, due to the tides and winds in the area.” Unconfirmed reports indicated that Abdel Ahad had contacted the control tower because the pilot of the plane suffered a health condition. But Lebanese Aviation Club board member Michel Abboud dismissed that claim. “The planes are usually in continuous contact with the control tower and there were no defects reported by those who were on board the plane,” he said. The Lebanese Aviation Club, which was created in 1923, is one of three aviation learning centers in Lebanon that train private pilots and provide licenses. The Cessna 172 plane that crashed is what is typically used for training flights and cannot hold more than three people, including the pilot. A similar accident occurred on July 8, when a Cessna 172 with three people on board crashed in the Ghosta region, 36 kilometers north of Beirut, after having deviated from the approved flight plan. That plane was owned by Open Sky and the flight was for tourism. The pilot and two passengers on board were killed. “In the Ghosta accident, the captain also did not contact the control tower which adds to the peculiarity of the situation,” Kashouh said. “The results of that investigation have not been released.” Lebanese Interior Minister Bassam Mawlawi traveled by boat to the crash site where he was briefed on the rescue operations of the Lebanese Army and Civil Defense teams. “Rescue boats split the crash area into squares so that the divers could scan the whole area,” Mawlawi said. “There is a large number of volunteers with their equipment who are helping in the rescue mission.” Mawlawi also urged the Lebanese Ministry of Public Works to take additional measures in inspecting all aviation training planes. “As part of ensuring public safety, so that these accidents do not get repeated,” he said.

HAMMAMET, Tunisia: The October sun warms the sands of Hammamet beach on Tunisia’s east coast, but the coronavirus pandemic still casts a shadow and visitor numbers are yet to bounce back.

After two ruined seasons in a row, operators in Tunisia and Morocco are licking their wounds and hoping the lifting of travel restrictions will spell better days.

This year was better than the last, “which was really a terrible season. But (2021) was still only half as good as 2019,” said Haykel Akrout of the Bel Azur hotel.

The luxury facility, with swimming pools overlooking rows of deckchairs along the shore, had to halve its capacity of 1,000 beds in July as a spike in coronavirus cases battered Tunisia.

The country found itself on European nations’ red lists, making it virtually impossible for holidaymakers from major markets including France, Germany and Italy to visit.

Dora Milad, head of the FTH hoteliers’ association, said the “catastrophic” 2020 season had battered the sector, with hotel stays down by 80 percent.