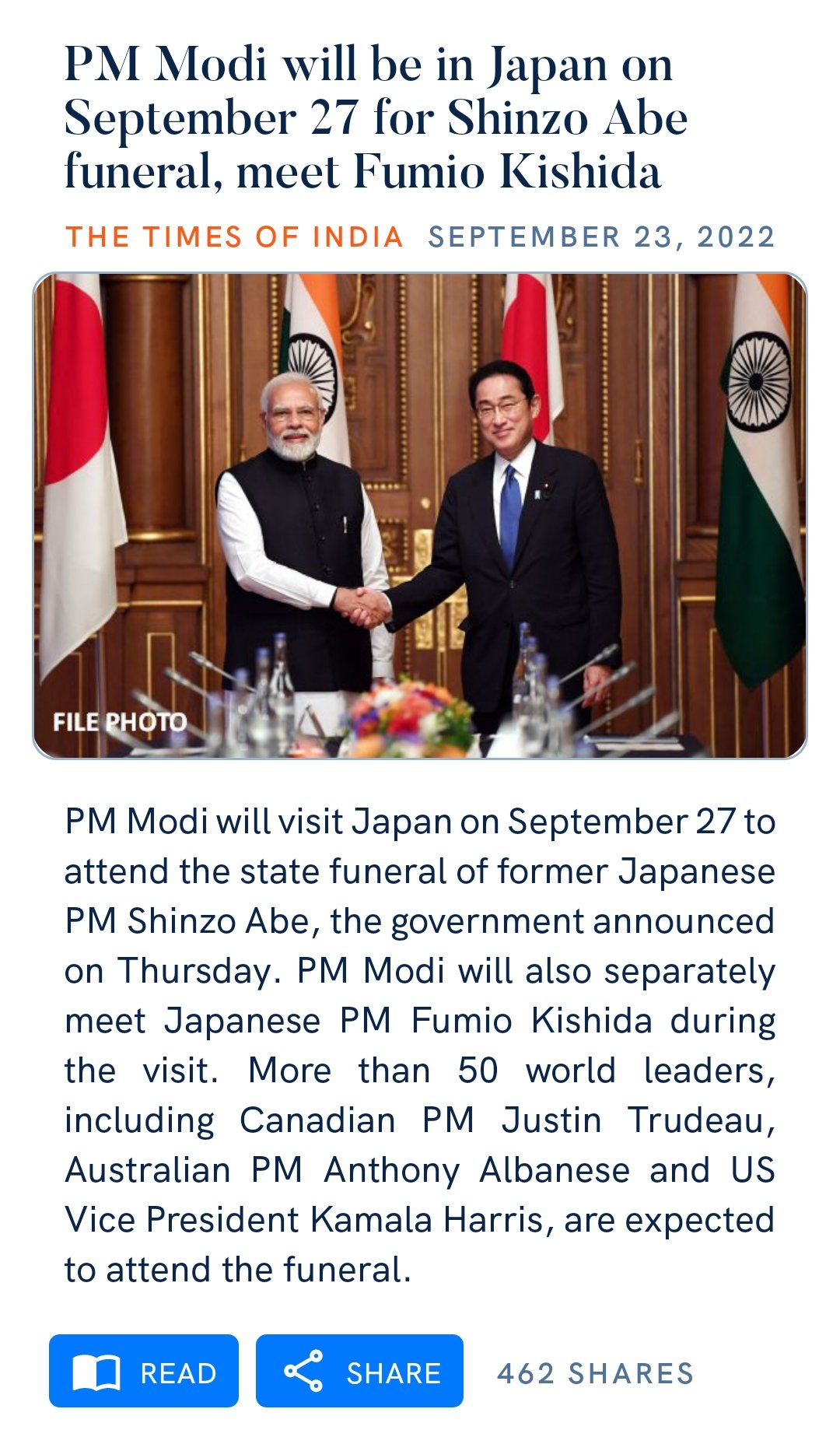 TOKYO, Sept 23 ― Japan will honour former Prime Minister Shinzo Abe with a rare state funeral on Tuesday, a ceremony that has become a flashpoint for public anger over political scandal and deepened opposition to successor Fumio Kishida.

Abe’s assassination in July touched off a series of revelations about ties between lawmakers in the ruling Liberal Democratic Party (LDP) he once led and the Unification Church, an organisation critics call a cult.

Kishida has sought to control the damage, apologising and promising to sever the LDP’s links to the church, which was founded in South Korea in the 1950s and is known for its mass weddings and aggressive fundraising. But the fallout for the party, and his government, has been immense.

Abe’s suspected killer accused the church of impoverishing his family, according to police. In social media posts before the killing, he blamed Abe for supporting the group.

A church spokesperson has apologised for any trouble it may have caused the people of Japan or LDP lawmakers and said it would crack down on any excessive soliciting of excessive donations. The church has also promised a quick response to complaints or requests for donation refunds.

Disclosures that at least 179 LDP members, include several high-profile lawmakers, have had ties to the church have sent Kishida’s ratings to their lowest since he took office about a year ago, raising the possibility his grip over the party could weaken, making it more difficult for him to deliver on his policy pledges.

Some 62 per cent of respondents in a recent poll by the Mainichi newspaper said they opposed holding a state funeral for Abe. Among the reasons respondents gave were that the former premier was not worthy of the honour, and the high price tag. The government estimates the cost at US$12 million (RM54.9 million) ― more than six times an earlier estimate ― but comments on social media show most believe it will cost more.

Holding a state funeral “was a big miscalculation” for Kishida, said Tomoaki Iwai, an expert on Japanese politics and professor emeritus at Nihon University. “When he originally decided on the funeral there were a lot of people in favour, but then there were the reports of Abe’s involvement with the Unification Church, and so opposition grew.”

That public anger was gruesomely highlighted on Wednesday when a man in his 70s set himself on fire near the prime minister’s residence in an apparent protest at the state funeral, Japanese media reported. The man was taken to hospital, conscious.

The opposition to the funeral reflects how divisive Abe remains in Japanese society. While loved by nationalists and many on the right for his muscular defence and pro-market policies, he was reviled by many who want to keep the country’s pacifist constitution unchanged.

Even Nobel Peace Prize winner Eisaku Sato, who oversaw Okinawa’s return to Japan from U.S. control 50 years ago and was the longest-serving premier before Abe, did not have a state funeral when he died in 1975. The government felt there was no legal basis for it.