Lackluster US Loses to Japan 2-0 in World Cup Warmup

Lackluster US loses to Japan 2-0 in World Cup warmup via @NewsNowUK. 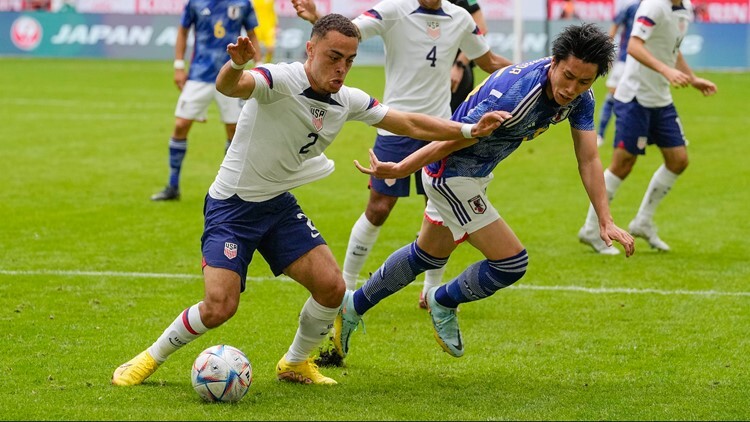 Daichi Kamada scored following Weston McKennie´s giveaway in the 24th minute, Kaoru Mitoma added a goal in the 88th, and Japan beat an lackluster and injury-depleted United States 2-0 on Friday in Düsseldorf, Germany, in the Americans´ next-to-last World Cup warmup.

The Americans failed to get a single shot on goal, playing a dismal first half and showing only slightly more initiative after four changes at halftime. They have one win, five losses and four draws in 10 road games since a victory at Northern Ireland in March 2021, and just one goal in their last five away games.

U.S. star Christian Pulisic did not dress because of an unspecified injury. The 14th-ranked Americans already were without Tim Weah, Yunus Musah, Chris Richards, Antonee Robinson and Zack Steffen, and Miles Robinson will miss the World Cup because of a torn Achilles.

A series of defensive breakdowns plagued the U.S. in the first half and put pressure on goalkeeper Matt Turner, who has played just one match this season for Arsenal. Turner made a pair of diving saves in the second half, on Junya Ito in the 55th and Kamada in the 65th.

Kamada scored after McKennie received a pass from Tyler Adams and underhit a backpass. Hiroki Sakai ran onto the ball and passed to Ito. He played the ball to an open Kamada, who beat Turner to the far post from about 12 yards for his sixth international goal.

Japans Daichi Kamada is celebrated after scoring during the international friendly soccer match between USA and Japan as part of the Kirin Challenge Cup in Duesseldorf, Germany, Friday, Sept. 23, 2022. (AP Photo/Martin Meissner)

Mitoma scored his fifth international goal, turning around second-half sub Reggie Cannon and bending the ball around Zimmerman to beat Turner to the far post with a right-foot shot from just inside the penalty area.

The U.S. has one last exhibition ahead of the World Cup, against 53rd-ranked Saudi Arabia on Tuesday at Murcia, Spain. The USSF said it was too soon to determine whether Pulisic will be available.

Back in the World Cup after missing the 2018 tournament, the Americans open in Qatar against No. 19 Wales on Nov. 21, play fifth-ranked England four days later and close the first round against No. 22 Iran on Nov. 29.

Japan and China relations 50 years on