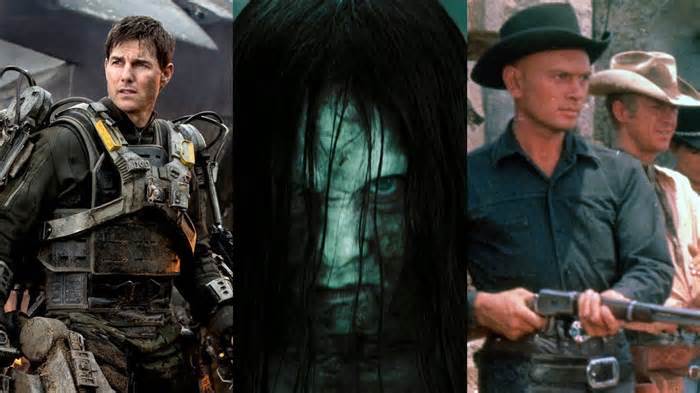 Bullet Train will surely be number one—with a bullet—at the box office this weekend. How could it not be, with a cast that includes Brad Pitt, Sandra Bullock, Bad Bunny, Brian Tyree Henry, and Joey King, and with stuntman/action director David Leitch (John Wick, Deadpool 2, Hobbs & Shaw) behind the camera? The film is just the latest in a long line of Hollywood productions that were either inspired by Japanese stories or were straight-up adaptations of Japanese properties.

Based on Maria Beetle, a 2010 novel by popular Japanese author Kōtarō Isaka, Bullet Train takes its premise—several assassins are stuck together on a speeding train—and branches off on its own territory. While the location is largely the same, the cast includes Americans and Brits alongside Japanese actors, with Pitt taking top billing as an unlucky hired gun named Ladybug.

Notably, Isaka himself approved Sony Pictures’ changes to his source material, suggesting that an adaptation need not be beholden to an all-Japanese cast or production. “I don’t have any feeling of wanting people to understand Japanese literature or culture,” he told the New York Times. “It’s not like I understand that much about Japan, either.” That said, the film may inspire moviegoers to pick up Maria Beetle or one of his other books, whose nuances have been translated into other languages on the printed page, but not transformed in the way that Leitch does on film.

Suffice it to say that Bullet Train isn’t the first Hollywood film with origins in Japan. The A.V. Club takes a look at Tinseltown’s takes on a handful of other projects—some that began as books, and others that found success first on film in their native language. In each case, the power of these stories transcends (or at least tests) geographic and cultural boundaries as much as it benefits from them.

It’s a little-known but mighty relevant fact that Akira Kurosawa’s 1954 classic Seven Samurai was actually released in the U.S. as The Magnificent Seven. So, it made perfect sense that John Sturges’ adaptation bore the same name. Thanks to Sturges and a top-notch cast that included Yul Brynner, Steve McQueen, Robert Vaughn, James Coburn, Charles Bronson, and Eli Wallach as the hiss-worthy baddie, they created a classic—translated to that most American of genres, the Western—that works on its own merits while honoring Seven Samurai.

A Fistful Of Dollars is a melting pot of a movie, something of a miracle, and the subject of much debate when it comes to adapting Japanese movies. It’s a remake of Akira Kurosawa’s 1961 Samurai drama Yojimbo—only Kurosawa and co-writer/producer Ryūzō Kikushima received no credit. Quite understandably, Toho, the production entity behind Yojimbo, filed a lawsuit, which delayed the release of A Fistful Of Dollars. Of course, A Fistful Of Dollars never, ever should have worked, what with an American lead (Clint Eastwood), an Italian director (Sergio Leone) who spoke no English, and Italian, German, and Spanish producers. And yet, it’s a masterpiece, and one of the best Spaghetti Westerns ever made.

The great fire-breathing behemoth Godzilla has always been synonymous with Japan, though Hollywood was attracted to the creature’s destructive power almost from the beginning of the franchise: Three years after the original release, Raymond Burr was added to the Japanese film for a 1956 hybrid production called Godzilla, King Of The Monsters! for a U.S. release. But it wasn’t until 1998 that Hollywood actually decided to make its own Godzilla film. By then, of course, the Atomic Age paranoia that inspired the original—and the powerful sorrow that oozes out of its story—was long since forgotten, leaving behind only empty spectacle. Roland Emmerich’s film was rightly panned in 1998, but Gareth Edwards got more right with his version of the story in 2014, which of course led to a “monsterverse” that introduced other creatures —both friend and foe.

The Ring—in which anyone who watches a cursed video dies seven days later—can lay claim to being the remake that spawned a deluge of Americanized iterations of Japanese films, in particular horror. Whether that’s a good thing or a bad thing is up for debate, but The Ring, written by Ehren Kruger and directed by Gore Verbinski, wisely doesn’t pretend to be something other than a remake of the 1998 Japanese horror hit of the same name, which itself was based on Koji Suzuki’s 1991 book. Ring was true to Ring, and The Ring tries to capture the, ahem, spirit of its source materials, though some purists suggested it failed to do so. The film is edgy, atmospheric, and features strong performances from the female leads, Naomi Watts and Daveigh Chase. The success of The Ring opened the horror adaptation floodgates: Dark Water, based on Dark Water (also based on a Suzuki story); Pulse, based on Pulse; One Missed Call, based on One Missed Call; and The Grudge, based on Ju-on: The Grudge.

Not every remake of a Japanese movie in the 2000s was of the horror variety. The 1996 romantic drama Shall We Dance? followed an unhappy Japanese man who learns to ballroom dance, much to the surprise of his wife, who thinks he’s having an affair. The U.S. remake gave us Richard Gere as the husband, Susan Sarandon as the wife, and Jennifer Lopez as Gere’s dance teacher. The film garnered so-so reviews, but it’s a personal favorite, with charming performances, lots of heart, and understated direction by Peter Chelsom.

Eight Below follows a rescue mission involving a bunch of sled dogs out in the frigid cold. That’s also the basic premise of Antarctica, the 1983 Japanese adventure/survival film on which it was based. Antarctica itself was modeled on a real-life incident that occurred in 1958. Directed by Frank Marshall, Eight Below shifts the events to 1993 and offers a different setup featuring American characters (played by Paul Walker, Moon Bloodgood, Jason Biggs, etc.). It’s a gripping, taut ride, with heroic, photogenic dogs, and you can’t help but cheer and cry by the end.

Japanese manga and anime series have served as launching pads for several Hollywood productions. The Wachowskis’ colorful, highly stylized box-office dud Speed Racer was based on Mach GoGoGo, the Speed Racer manga and animated series from the 1960s. Ghost In The Shell, a hugely popular manga, sparked a cottage industry of films, games, and shows in Japan and the U.S. Unfortunately, the mega-film version starring Scarlett Johansson elicited awful reviews and bombed at the box office. And then there’s Alita: Battle Angel, based on the manga title Gunnm. Even an epic team-up between James Cameron (producer and co-writer) and Robert Rodriguez (director) couldn’t nudge this visually stunning adaptation into blockbuster territory.

Many fans of the Tom Cruise hit Edge Of Tomorrow don’t realize that it was derived from a Japanese book, the young-adult sci-fi novel All You Need Is Kill by Hiroshi Sakurazaka, published in 2004. Later, in 2014, the book was morphed into a manga in Japan, an English-language graphic novel in America, and also director Doug Liman’s pulse-pounding film. Edge Of Tomorrow, which plays like an alien invasion version of Groundhog Day, with Cruise’s character, Major William Cage, time looping and repeatedly dying until he—with an assist from the ass-kicking Sergeant Rita Vrataski (Emily Blunt)—saves the day.