How the Talibans win in Afghanistan could reshape the jihadist movement

#OPINION: Pakistan’s role in raising, nurturing, promoting and providing shelter, safe havens, training and logistics for the Taliban is an open secret acknowledged by just about everyone other than Pakistan, writes @gmukhopadhaya. 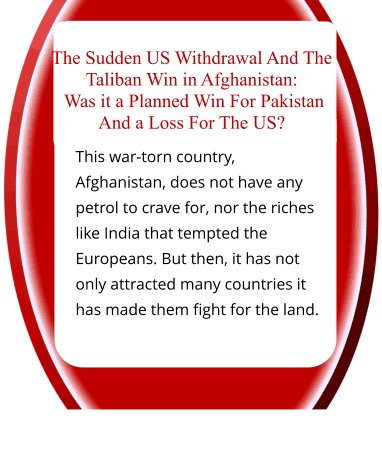 The irony of a superpower seeking security guarantees from a non-state actor for safe withdrawal of its own forces and those of its allies would not win popular vote in democracies.

The Taliban has once again swiftly risen to power and questions are being raised over whether the West will recognise Taliban as a legitimate actor in international politics or not. International media is actively reporting on areas now under the control of the Taliban in Afghanistan and colourful maps are reflecting the domino effect of the Taliban’s rise to power within Afghanistan as it seized control of one city after another while always retaining its stronghold in the rural areas. The media images of people desperate to leave Afghanistan have for the moment caught the attention of the public and as politicians try to face them and offer face-saving formulae for their actions and reactions, it is pertinent to dwell on some questions regarding the conditions for peace and legitimacy of the Taliban.

In a classic act reminiscent of colonial power manoeuvres, the Trump administration deliberately bypassed the National Unity Government of Afghanistan led by Ashraf Ghani and entered into covert negotiations and then an agreement with the Taliban. The text of this legal ‘Agreement for Bringing Peace to Afghanistan’ signed between the Taliban and the US was never debated at any length within the US Congress and neither in the British Parliament. The full text of this agreement was not published in the front pages of any newspapers to encourage people to participate and deliberate in a democratic manner. The irony of a superpower seeking security guarantees from a non-state actor for safe withdrawal of its own forces and those of its allies would not win popular vote in democracies.

The text of the legal ‘Agreement for Bringing Peace to Afghanistan’ signed between the Taliban and the US was never debated at any length within the US Congress and neither in the British Parliament.

This agreement explicitly and rhetorically states that the United States does not recognise the Taliban or the Islamic Emirate of Afghanistan as a state. But the principal and only actor recognised in this agreement is the Taliban. This raises some interesting questions with regard to the politics of recognising a state as an essential condition for peace in the Westphalian sovereign state system; a question that is of considerable interest amongst scholars dating back to the struggle of the colonies for their right to self-determination and independence. It is this question that haunts the international realm as actors struggle for recognition and legitimacy in a world order organised according to Eurocentric practices of the sovereign state system.

Despite asserting that the US does not recognise the Islamic Emirate of Afghanistan, the text of this agreement is explicit in acknowledging that the Taliban controls significant tracts of territory within Afghanistan. It is based on this recognition of the de-facto territorial control of the Taliban — despite occupation and military intervention by the US and its allies for two decades — that the agreement seeks ‘guarantees and enforcement mechanisms’ from the Taliban to prevent the use of “the soil of Afghanistan by any group or individual against the security of the United States and its allies.”

The language of this text is tantamount to a state entering into an agreement with another state regarding not posing an external threat to its sovereignty.

The control of territory is a significant pre-condition for recognising a state in international relations. The text of the agreement repeatedly emphasises that the US and its allies seek guarantees from the Taliban that the ‘Afghan soil’ under their control will not be used against the security of the US and its allies. The language of this text is tantamount to a state entering into an agreement with another state regarding not posing an external threat to its sovereignty. This becomes even more explicit as the agreement states, ‘The United States and its allies will refrain from the threat or use of force against the territorial integrity or political independence of Afghanistan or intervening in its domestic affairs.’ This is nothing short of a de-facto recognition of the sovereignty of Afghanistan under the Taliban.

The agreement also holds the Taliban responsible for starting intra-Afghan negotiations with Afghan sides after the announcement of the two security guarantees mentioned above. During the colonial era, it was the leading national movement, be it the Indian National Congress in India or the African National Congress in South Africa, that undertook the task of unifying and securing cooperation amongst the different groups and factions within a country. This agreement entrusts this task to the Taliban suggesting that there is room for recognising them as Afghan nationalists. Interestingly, any possibility for this kind of recognition and undertaking is entrusted only ‘after’ seeking security guarantees from the Taliban for the West.

Treaties and agreements on the hard subject of security guarantees and enforcement mechanisms have traditionally belonged to the realm of state-to-state interaction and not in the domain of agreement between a state and non-state actor, especially one that has long been demonised as a terrorist. This observation becomes all the more worthy of consideration given that it carries provisions for ‘a plan to expeditiously release combat and political prisoners as a confidence building measure’ and insists that those released ‘will be committed to the responsibilities in this agreement.’ During the ‘War on Terror,’ considerable ink has been spilt by lawyers representing the US government and the International Committee of the Red Cross (ICRC) on the definition of lawful and unlawful combatants and prisoners of war. This agreement appears to conveniently erase all memories of this lawfare as it refers to the release of ‘combat and political prisoners.’

In a gesture of imperial benevolence, it further promises the Taliban that ‘with the start of intra-Afghan negotiations,’ the US and its allies will ‘initiate an administrative review of the current US sanctions and the rewards list’ against members of the Taliban and will also ‘start diplomatic engagement’ at the United Nations Security Council from the sanctions list by 29 May 2020. The potential of these promises is as expected yet to be realised. In a classic replay of colonial gestures, the faith in these promises appear to be belied in the aftermath of the collapse of the government in Afghanistan and President Biden’s speech and statements asserting that the passage of time has not changed the Taliban. The Taliban needs to be disciplined further, if necessary, with the threat of the use of force.

In a language of an insecure and hyperventilating actor, the agreement repeatedly insists that ‘the Taliban will send a clear message’; ‘the Taliban will prevent’; ‘the Taliban will not allow’; ‘the Taliban will not provide’ any individuals and groups including the al-Qaida the soil of Afghanistan for recruiting, training, fundraising, and threatening the US and its allies. The precarity of such asymmetrical promises and expectations for ‘positive relations’ are to be the bedrock for any future dialogue and negotiation for ‘economic cooperation for reconstruction with the new post-settlement Afghan Islamic government.’ In other words, the US government has reconciled itself to the idea that even after intra-Afghan dialogue and negotiations, an Islamic government will be established in Afghanistan and US will ‘not intervene in its internal affairs.’ Thus, religion and its impact on the domestic population of a state is rendered to be of secondary importance as per this agreement.

This agreement signed in Doha, Qatar, is meticulous in its references to the dates and timelines as per the Hijri Lunar calendar, Hijri Solar calendar, and the Gregorian calendar and is produced in Pashto, Dari, and English languages. This meticulous attention to registering time and not the lived experiences of time as experienced by the Afghans vis-à-vis the Americans and their allies articulates conditions for peace in Afghanistan. In this legal agreement, there is no emotive chest-beating for civil and political rights or socio-economic rights for Afghans. The conditions for peace in Afghanistan are hostage to the legitimacy of Taliban and contingent to the pre-requisites of security for the West.