Lake: How Pakistan won the war in Afghanistan 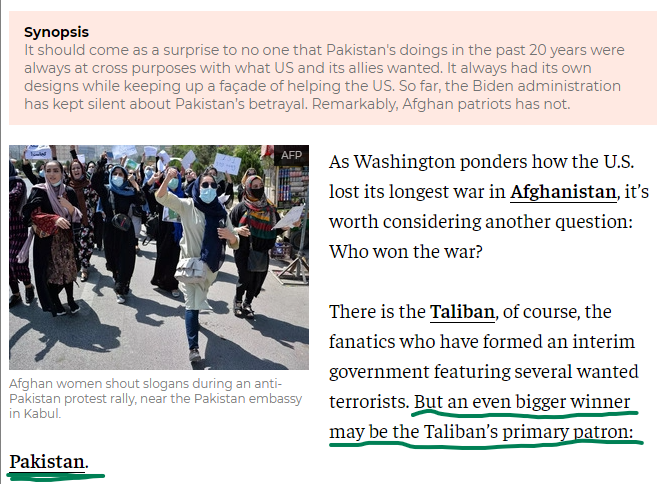 There is the Taliban, of course, the fanatics who have formed an interim government featuring several wanted terrorists. But an even bigger winner may be the Taliban’s primary patron: Pakistan.

Most U.S. allies expressed shock, sadness and anger at the Taliban’s victory last month in Kabul. But Pakistan Prime Minister Imran Khan celebrated the rout of Afghanistan’s elected government, saying the Taliban had “broken the shackles of slavery.”

For much of the war on terror that began after 9/11, Pakistan played a double game. It occasionally helped track and detain al-Qaeda and Taliban leaders. In 2010, Pakistani and U.S. special operations forces arrested Mullah Abdul Ghani Baradar in Karachi. All the while, however, elements of the Pakistani military and intelligence services provided sanctuary, funding and training for the Taliban and its allies in the lethal terrorist group known as the Haqqani network.

For the first 10 years of the Afghanistan war, this was an issue that the U.S. and Pakistan preferred to debate in private. After the Haqqani network orchestrated a truck bombing at a NATO outpost near Kabul and an assault on the U.S. embassy there in September 2011, Admiral Mike Mullen, then the chairman of the joint chiefs of staff, broke the silence. “The Haqqani network acts as a veritable arm of Pakistan’s Inter-Services Intelligence agency,” he said.

Mullen’s accusation should have surprised no one. A few months earlier, the U.S. had killed Osama bin Laden, who was then living comfortably in Abbottabad, home of the Pakistan’s equivalent of West Point. There is a reason Mullen didn’t give his Pakistani counterparts advance notice of that raid.

Between 2001 and 2011, the U.S. provided Pakistan with more than $20 billion in military assistance. That subsidy began to decrease after 2011. In 2018, with a few narrow national-security exceptions, the U.S. suspended security assistance.

The restrictions and eventual suspension of military aid were really the only ways the U.S. ever tried to punish its ostensible client. By his second term, President Barack Obama was looking for a way to get out of Afghanistan. And while there was a modest surge of forces in President Donald Trump’s first year in office, his administration ended up negotiating the surrender that President Joe Biden just completed.

So it’s no wonder that Pakistan is celebrating the Taliban’s victory. A faction of its deep state had been working to return the Taliban to power since 2001.

So far, the Biden administration has kept silent about Pakistan’s betrayal. Remarkably, a remnant of Afghan patriots has not. On Tuesday, protesters in Kabul demanded that Pakistan not intervene in their sovereign affairs.

It would be nice if there were some official show of U.S. support for these courageous protesters. But it’s unlikely. As Biden has said many times in the last several months, the post-withdrawal plan is for the U.S. to retain an “over the horizon” capability to target terrorists in Afghanistan. That means the U.S. will need Pakistan’s approval for flights over its airspace.

America’s “forever war” in Afghanistan may be over. But just across the border, in Pakistan, America’s former client still holds leverage over the superpower it helped defeat. –Bloomberg