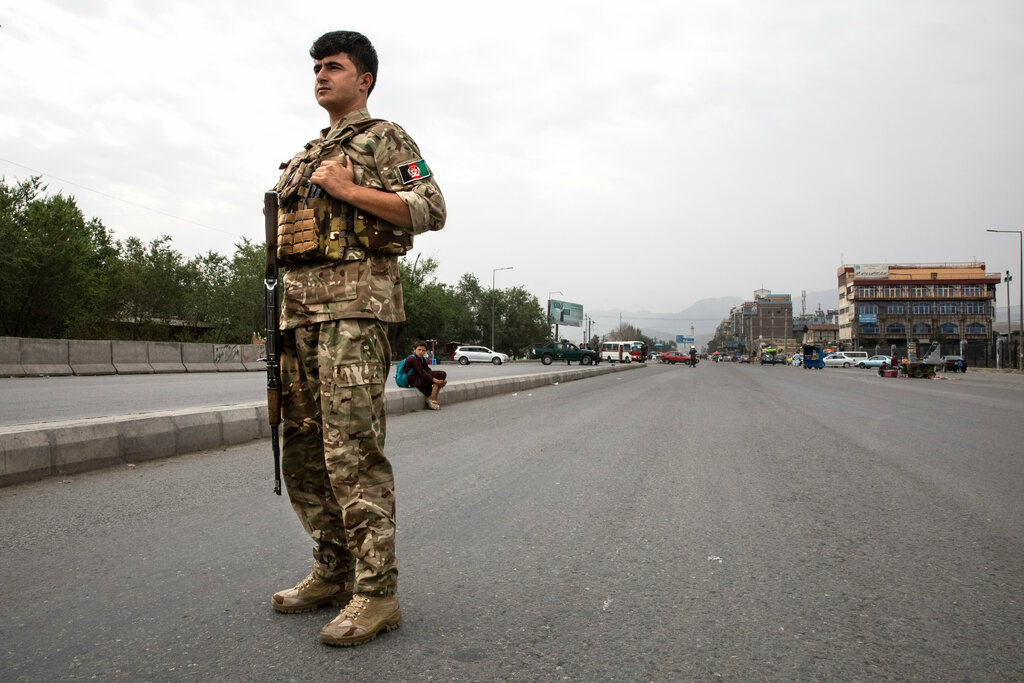 The Afghan security forces have the capacity to sufficiently fight and defend their country, and we will continue to support the Afghan security forces where necessary, in accordance with the guidance of the president and the secretary of defense. The future of Afghanistan is squarely in the hands of the Afghan people. There clearly is a narrative out there that the Taliban are winning. In fact, they are propagating an inevitable victory on their behalf. They’re dominating a lot of the airwaves on that sort of thing. I would tell you that as of today, more or less, I guess it’s about 212, 213. It’s in that range, two hundreds, of the district centers are in Taliban control. It’s about half of the 419 that are out there. You’ve got 34 provincial capitals in Afghanistan. None of them have been seized, as of today, by the Taliban. Although the Taliban is putting pressure on the outskirts of probably about half of them, 17 of them, in fact. And what they’re trying to do is isolate the major population centers. They’re trying to do the same thing to Kabul. And roughly speaking, order of magnitude, a significant amount of territory has been seized over the course of six, eight, 10 months, sort of thing, by the Taliban. So momentum appears to be, strategic momentum appears to be sort of with the Taliban. The Afghan security forces, though, are consolidating their forces. So part of this is they’re giving up district centers in order to consolidate their forces because they’re taking an approach to protect the population. And most of the population lives in the provincial capitals, in the capital city of Kabul. There’s a possibility of a negotiated outcome. That’s still out there. There’s a possibility of a complete Taliban takeover or possibility of any number of other scenarios, breakdowns, warlordism, all kinds of other scenarios are out there. We are monitoring very closely. I don’t think the endgame is yet written.

The nation’s top military officer offered a glum assessment on Wednesday of the security situation in Afghanistan, saying the Taliban had seized “strategic momentum” over Afghan military forces who were falling back to prioritize the protection of important cities, including Kabul, the capital.

The comments by Gen. Mark A. Milley, chairman of the Joint Chiefs of Staff, echoed mounting reports from the ground in Afghanistan. But his sober, almost clinical, account of recent Taliban gains hammered home the point.

“There’s a possibility of a complete Taliban takeover, or the possibility of any number of other scenarios,” General Milley said. “I don’t think the end game is yet written.”

The Taliban have taken control of more than 210 of Afghanistan’s roughly 420 districts in recent months, General Milley told reporters at a Pentagon news conference. They are also pressuring half of the country’s 34 provincial centers and are aiming to isolate Kabul and other major cities, he said.

“Strategic momentum appears to be sort of with the Taliban,” he said. “There clearly is a narrative out there that the Taliban are winning. In fact, they are propagating an inevitable victory on their behalf.”

But General Milley, who appeared alongside Defense Secretary Lloyd J. Austin III in their first joint news conference since May 6, sought to reassure the Afghan government that the United States would continue to provide humanitarian and security assistance from afar. All American forces have left the country, except for about 650 troops assigned to guard the U.S. Embassy and the Kabul airport.

Both General Milley and Mr. Austin put responsibility for the country’s fate on Afghans and their leaders, not the Biden administration. Mr. Austin said that American airstrikes after Aug. 31, the military withdrawal deadline, would be reserved for Al Qaeda and other terrorist targets, not Taliban fighters attacking Afghan forces.

“This is going to be a test now of the will and leadership of the Afghan people, the Afghan security forces and the government of Afghanistan,” General Milley said.

In response to the Taliban offensives, hundreds of Afghan troops have surrendered, giving up their U.S.-supplied equipment and fleeing, sometimes into neighboring countries. Afghan government counterattacks have had limited success.

General Milley said that many other Afghan troops were falling back to protect larger provincial cities. Violence has waned in the past few days with the beginning of the Muslim celebration of Eid al-Adha, he said, but the country could reach a turning point as fighting resumes.

Spill over from Taliban resurgence in Afghanistan raises regional concerns

Taliban claims to favour ‘settlement’ Can it be trusted?

The Taliban: what could its return to power mean for Afghanistan?
© Copyright 2021 tweet247.net All Rights Reserved.