A Canadian town is under evacuation after breakaway ice causes flooding

A Canadian town is under evacuation after breakaway ice causes flooding. 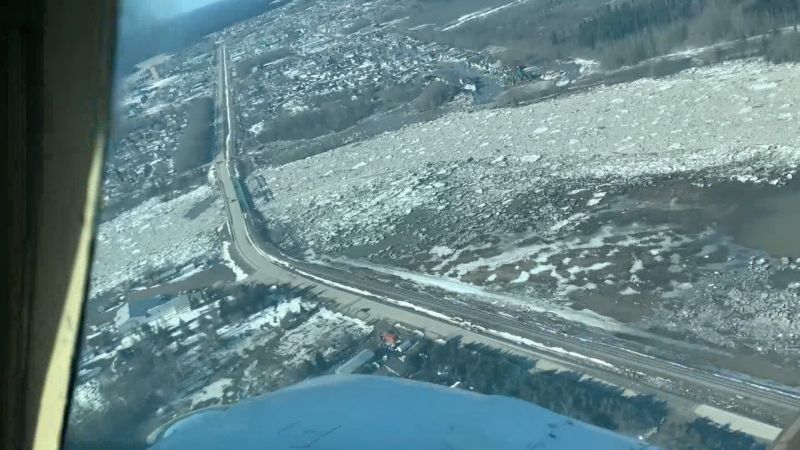 Residents of Hay River, on the south side of Great Slave Lake, have been ordered to leave and find shelter, according to a Thursday news release from the town.

“This is a difficult time for our community,” the town of Hay River said in an updated news release Friday. “Please remember that people today are tired, worried and under a lot of stress. Be kind to one another. Take actions that are productive to getting through this together. “

There is no road access in certain areas, including the Vale Island Zone, and “the availability of essential services, including health, food, transportation etc.” is not confirmed in the town, according to the release.

“What a night this has been. Entire town on flood evacuation… half the town has water and ice in it,” Martel said on Facebook with photos showing the aftermath of severe flooding. “Never seen this before my life and hope to never see it again. Stay safe everyone…”

“The town was not prepared, as this hasn’t happened to the south side of the bridge before,” he added, “The old town north of the bridge, it is common to have high water in the spring, as it’s an island.”

The city first advised residents on April 7 to be prepared for the potential of flooding from ice breakup. Warmer temperature, snow melt and rising water levels all played a part of the flooding over the past couple of weeks.

“Entry to the community is restricted to emergency and essential services.” the news release said. “The town will fully shift from response to recovery activities once the breakup risk has reduced and hazards tied to the flooding have been mitigated.”

Mikey McBryan, a resident of Yellowknife on the north side of Great Slave Lake, recorded video from a plane on Thursday, flying over the area and showing the Hay River Merlyn Carter Airport runway under some water, and ice chunks in the surrounding river.

Russia-Ukraine war: What happened today (May 26)

EXPLAINER: What Turkeys Erdogan could gain in NATO debate

Police in Brazil gas man to death in trunk of car, video appears to show
© tweet247.net 2022