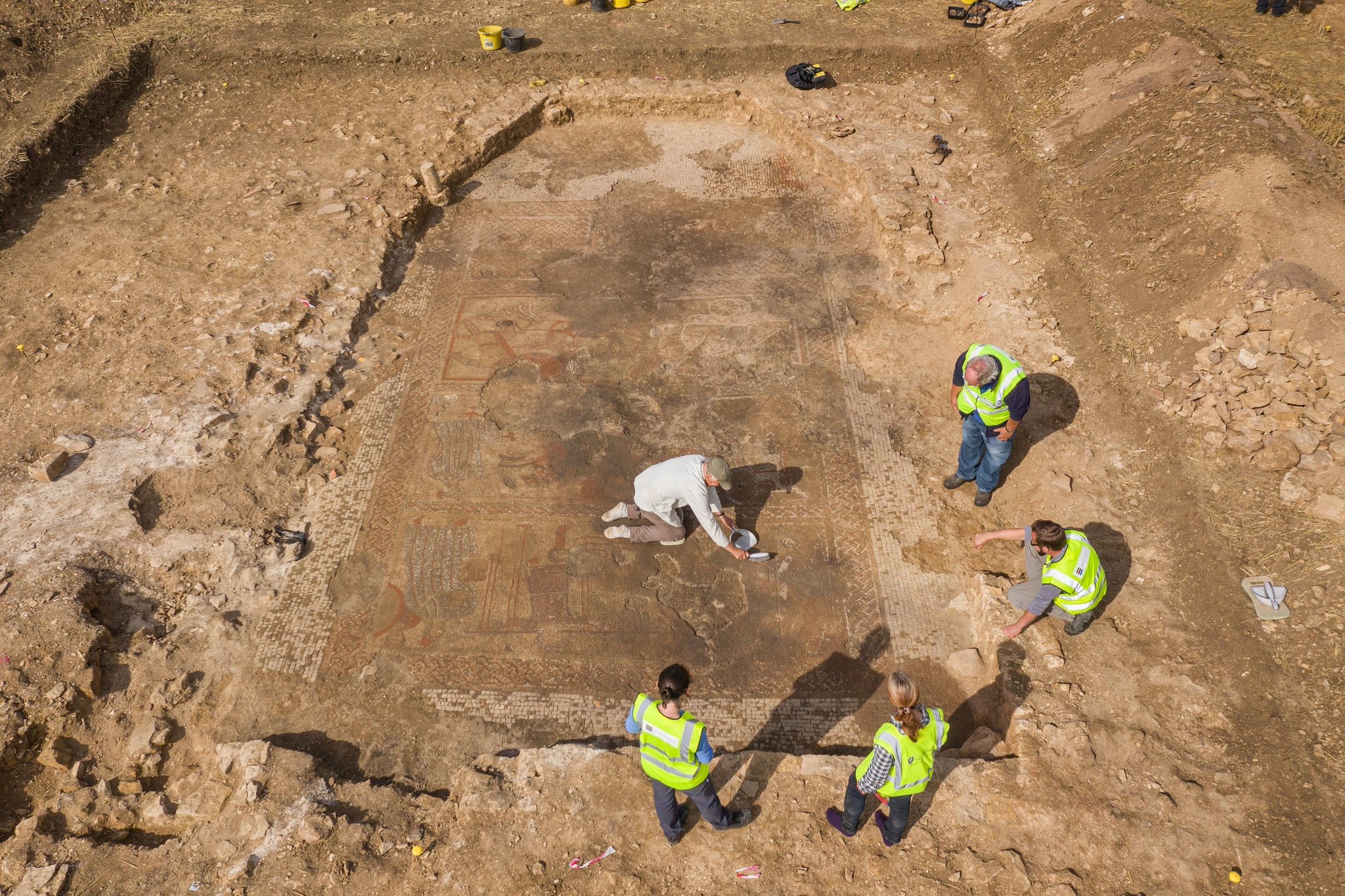 When Jim Irvine noticed some unusual bits of pottery while on a stroll on his father’s farm, he resolved to find out if something of interest lay beneath the field he had walked and ploughed for the previous three decades.

His curiosity – aided by some search engine satellite images and a shovel – has resulted in Britain’s most important Roman mosaic discovery in at least a century.

The 77sq m mosaic, housed in what would have been a substantial Roman villa complex, is the first of its kind found in Britain and one of only a handful of examples known in the world.

It is a result which far exceeds the expectations of Mr Irvine, 43, an engineer who had been out walking with his wife and two younger daughters in late summer 2020 when he first had an inkling that the site was hiding an echo of Britain’s late Roman past.

He told i: “I noticed these bits of pottery, oyster shells and what I now know to be orange Roman roof tiles. I knew that they had no business being there so when I got home I had a look at the field on Google Earth and noticed a crop mark we’d never noticed before.

“I’m not a farmer but I’ve helped out on the farm for many years. You are normally so busy concentrating on the thing you are doing that you don’t notice the soil. But on this occasion I did and I have always been interested in the past and how it connects to where we are today.”

After consulting a local museum, the father-of-two decided to take a further look. He said: “I have to confess I got a little impatient and we went back to make a day of it. The pandemic meant there wasn’t much else to do. I brought a spade and oriented myself using my phone and the field features. I dug a trench the width of the spade and about 8ft long and after a while hit something hard – some inch square tiles.”

Following a small amount of further excavation, Mr Irvine and his father, Brian, uncovered tiles depicting the red hat of King Priam – one of figures in the mosaic.

He said: “Because of the crop mark I knew there would be something to find. I was hoping for the top of a wall; I never expected in a million years to come across a mosaic, especially one as special as this. I knew we had to proceed very carefully and after a couple of hours I realised it was time to call in the specialists.”

What followed has been two successive summers of excavations on the site led by experts from Leicester University and heritage watchdog Historic England to uncover the intricate mosaic telling the story of the clash between Achilles and Hector.

The art work would have been the centrepiece of a triclinium or feasting area for a high-status individual, who doubtless would have wished to show off his or her masterpiece to guests. The Iliad was written a thousand years earlier, and its depiction in a late Roman era mosaic is unusual.

John Thomas, deputy director of Leicester University Archaeological Services, which oversaw the excavations, said: “This is certainly someone with a knowledge of the classics and the wealth to commission a piece of this sort of scale. It is a very dynamic work. I can imagine the owner walking around the room, talking his guests through the story of Hector and Achilles. It is certainly the most exciting Roman mosaic find in Britain for a century and in terms of its completeness, quite possibly unique.”

Richard Clark, county archaeologist for Leicestershire and Rutland, who was one of the first to view Mr Irvine’s initial find, said: “This has been the most extraordinary of discoveries. The villa, its mosaic and the surrounding complex is the most outstanding find in the recent archaeological history of Rutland, placing the county on a national and international stage.”

The site, which consists of up to ten buildings loosely arranged around a courtyard, is likely to have been a villa and agricultural estate dating to around the 3rd or 4th century AD owned by a wealthy Roman or an assimilated Briton.