Babies In The Womb Smile For Carrots But Grimace Over Kale, Study Finds. 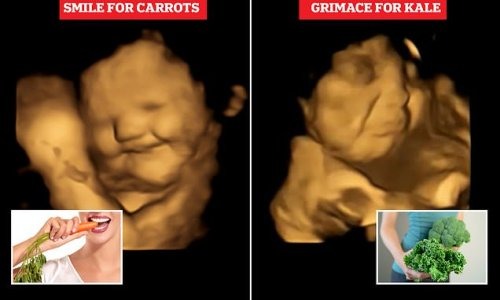 "Findings of this study have important implications for understanding the earliest evidence for fetal abilities to sense and discriminate different flavours," researchers wrote in the study published in Sage Journals.

About 20 minutes later, researchers said that 4D ultrasound scans showed most of the fetuses exposed to kale appeared to grimace, while most exposed to the carrot appeared to smile. The control group, on the other hand, did have the same response.

Keen on carrot, not so keen on kale…Fetuses make “laugh” or “cry” faces in reaction to different flavours according to @FetalLab@DurhamPsych.This is the 1st direct evidence that fetuses react differently to various tastes & smells in the womb 👉 https://t.co/13UKS7IjVMpic.twitter.com/xAqXGDqxQl

Now, researchers of the study are proposing, based on the findings, that repeated exposure to certain flavours in the womb may be a factor in establishing food preferences after birth. They believe that if a fetus were routinely exposed to a vegetable like kale while in the womb, they may be more likely to tolerate or enjoy it later in life.

Researchers also said that mothers who have healthy diets while they are pregnant may also find that their babies are less fussy eaters. However, the authors of the study noted that further research is still needed to determine definitely if fetuses are capable of experiencing emotions, likes, and dislikes.

Iran accuses US of trying to use unrest to undermine country

The rich are the biggest winners of Britains tax-cutting gamble