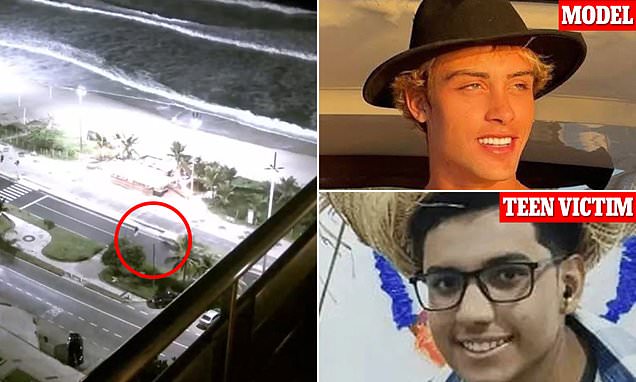 The footage was recorded from a condominium across the street from a beach in Rio de Janeiro neighborhood of Barra de Tijuca and shows João Cardim crossing the street with his mother, Mariana Cardim, last Saturday.

A surveillance video released Friday shows the moment Brazilian model Bruno Krupp (pictured) ran over 16-year-old João Cardim in Rio de Janeiro on Saturday night. Cardim died at a local hospital that night. The 25-year-old Krupp is now facing a homicide charge. He underwent surgery for a fractured clavicle Wednesday and called the incident an accident

Brazilian 16-year-old João Cardim (right) was walking with his mother, Mariana Cardim (left), to a beach in the Rio de Janeiro neighborhood of Barra de Tijuca last Saturday night when he was run over by Bruno Krupp, a Brazilian model who was riding a motorcycle without a license. The teenager lost a part of his leg leg in the accident and was rushed to a local hospital where he died

Still image from a surveillance camera video shows the moment João Cardim is running to the sidewalk before he is struck by a motorcycle operated by Brazilian model Bruno Krupp, an unlicensed motorist

The impact of the accident ripped off a part of João Cardim’s left leg and was recovered from a grass lawn near the entrance to the beach, where he and his mother planned to walk before returning to their home after attending a birthday party.