Brazils Bolsonaro says he will not be vaccinated against Covid-19

Brazil’s President Bolsonaro said he was “bored” of being asked about the COVID pandemic, which has killed 600,000 of his people. 🔗: 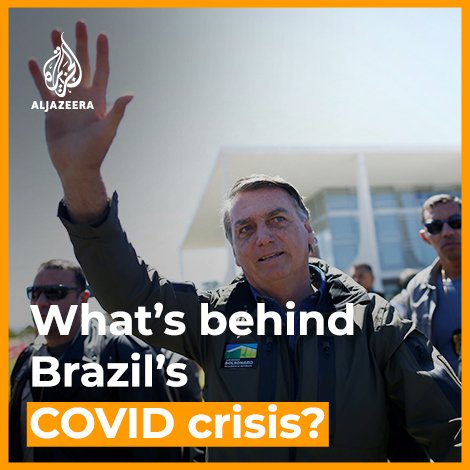 Brazil’s far-right President Jair Bolsonaro has said he did not want to be “bored” with questions about the country’s coronavirus death toll, just days after Brazil became the second country in the world to surpass 600,000 fatalities.

Bolsonaro – a COVID-19 sceptic who has downplayed the severity of the virus – was surrounded by supporters at the beach in Guaruja, in Sao Paulo state, on Monday when a journalist asked him about the death toll.

For months, the president has rejected calls to impose restrictions such as lockdowns to stem the spread of the virus, while public health officials have slammed his government for failing to quickly secure COVID-19 vaccines.

Thousands have taken to the streets to demand Bolsonaro’s impeachment over the pandemic as well as corruption allegations, but he has remained defiant and continues to reject public health measures.

On Sunday, Bolsonaro claimed that COVID-19 protocols at soccer matches had prevented him from attending a Brazilian championship football match in the city of Santos.

“Why a vaccine passport? I wanted to watch Santos now and they said I needed to be vaccinated. Why should that be?” Bolsonaro told journalists. Santos said Bolsonaro had not asked to attend the match, however.

Authorities this week allowed clubs to fill 30 percent of available seats in Brazilian championship games, but the protocol agreed to by the Brazilian soccer confederation says all people inside stadiums must be vaccinated and recently tested.