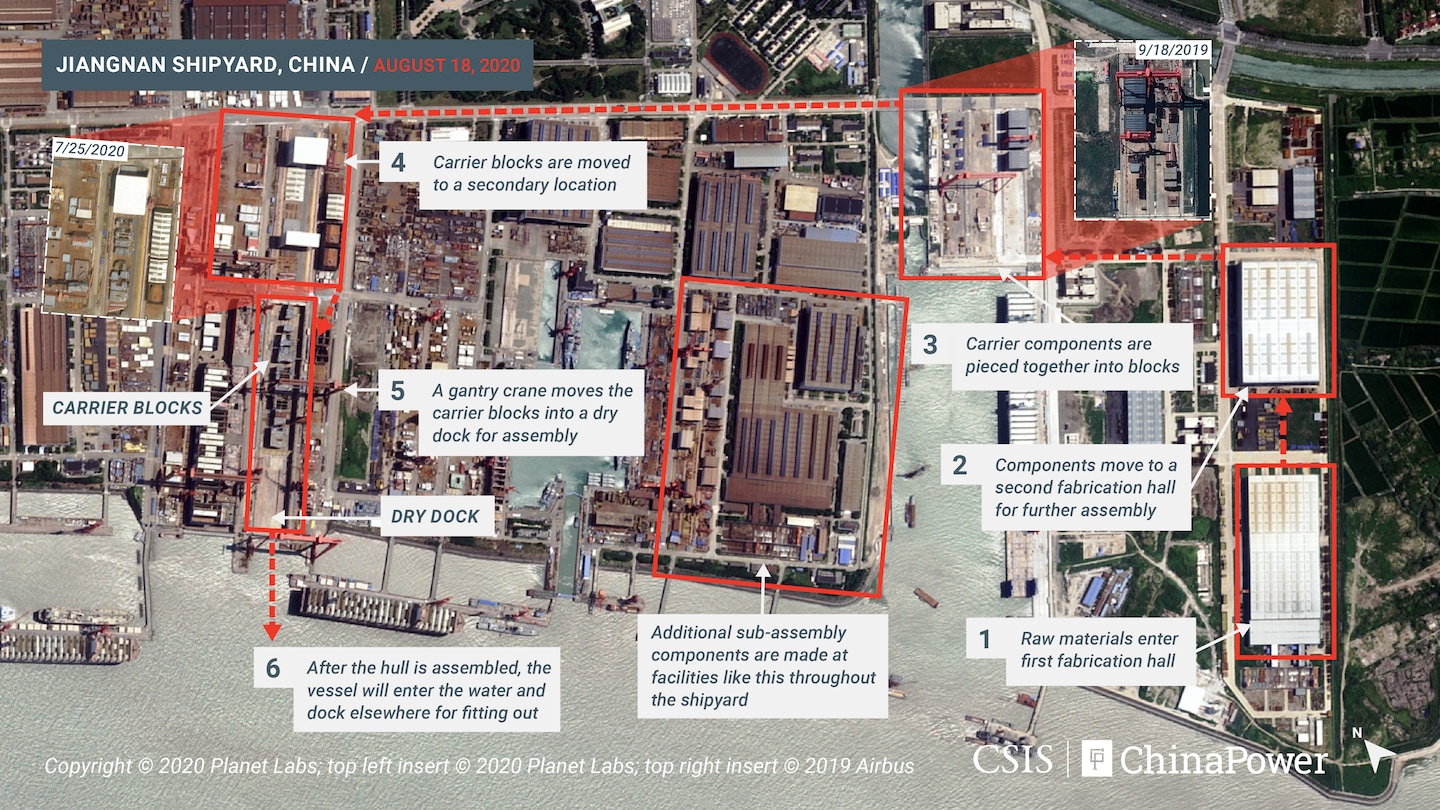 TAIPEI, Taiwan — Shipbuilders in Shanghai have laid out the hull of Chinas first modern aircraft carrier, which could be launched into the water in the coming months as it enters the latter phases of construction, according to new satellite images and state media reports.

High-resolution photos recently obtained by the Center for Strategic and International Studies (CSIS), a non-partisan think tank in Washington, show for the first time sections of the carrier being assembled in the open at a dry dock at the sprawling Jiangnan shipyard. The vessel, which will be China’s third carrier but the first to be equipped with modern technology, is likely to be larger than the previous two that were based on outdated Soviet designs. At the waterline, the new ship will be about 1,000 feet long and 130 feet wide, the photos show.

Matthew Funaiole, a researcher at the CSIS ChinaPower project, said it is not yet clear from the images whether the new carrier will have an electromagnetic catapult to efficiently sling fighter jets off its deck — the biggest question mark over current Chinese carrier technology. The USS Gerald R. Ford, commissioned in 2017, was the first carrier to include the cutting-edge feature.

Still, “the Chinese are showing tremendous capability of designing and fitting out vessels,” Funaiole said. “It’s moving along on pace. It’s impressive the process they’re going through to position themselves at the forefront of carrier technology.”

The progress of China’s third carrier has been of intense interest in rival capitals as well as inside China, where it is seen as a tangible symbol of the country’s development into a global power boasting a modern, world-class military. China has commissioned two carriers in the past decade: the Liaoning was a retrofit of an old Soviet model and the second, the Shandong, was Chinese-built but mostly a reverse-engineered copy of the Liaoning. The Shandong entered service in December and the third carrier likely won’t be combat-ready until 2023, Funaiole said.

After the hull of the third carrier is sealed, it could be put into water as soon as the end of this year to be fitted out, Chinese state media reported this week as similar photos surfaced on Chinese blogs and generated excitement among military hardware enthusiasts. The hawkish Global Times newspaper said the photos showed the carrier’s construction appeared to be progressing “smoothly” and cited an unnamed military expert as saying it would “likely” include electromagnetic catapults.

Over the weekend, a well-known scholar affiliated with the Chinese navy, Li Jie, told a forum in Beijing that China was planning not only a third but also a fourth carrier group, Caixin, a financial news magazine, reported. Most international scholars estimate that China intends to build out a fleet of at least six carriers. The U.S. Navy has 11 nuclear-powered carriers in service and plans to introduce several more.

Collin Koh, an expert on the People’s Liberation Army Navy at the S. Rajaratnam School of International Studies in Singapore, said there is still a lively debate in China over the utility of carriers in modern warfare and how they would stack up against the threat posed by U.S. submarines. And both Chinese and U.S. officials have acknowledged in recent years that China’s land-based power has already risen to the point where it may be able to keep U.S. forces out of the so-called “first island chain” surrounding China, including Taiwan, Japan and the Philippines, in the event of war over Taiwan, for example.

Geopolitical tensions in the region would suggest that any naval conflict involving China, such as over Taiwan, or disputed outposts in the East and South China Seas, is likely to occur relatively close to Chinese shores.

But Chinese military thinkers also increasingly argue that China needs to reach farther into the Pacific with carriers and contest the waters around the more remote “second island chain” — which include U.S. bases on Guam and Hawaii, Koh said.

“There’s been a convergence of views around this in the last five years” as China rolled out its carrier fleet, Koh said. “They’re seeing the potential of what they have.”

China is currently the world’s second-largest military spender and had a 2019 budget of $266 billion versus $718 billion for the United States. The spending rise budgeted for 2020 would be relatively small, the Chinese government announced in May, as the economy encountered structural headwinds, a trade war with Washington and a coronavirus pandemic.