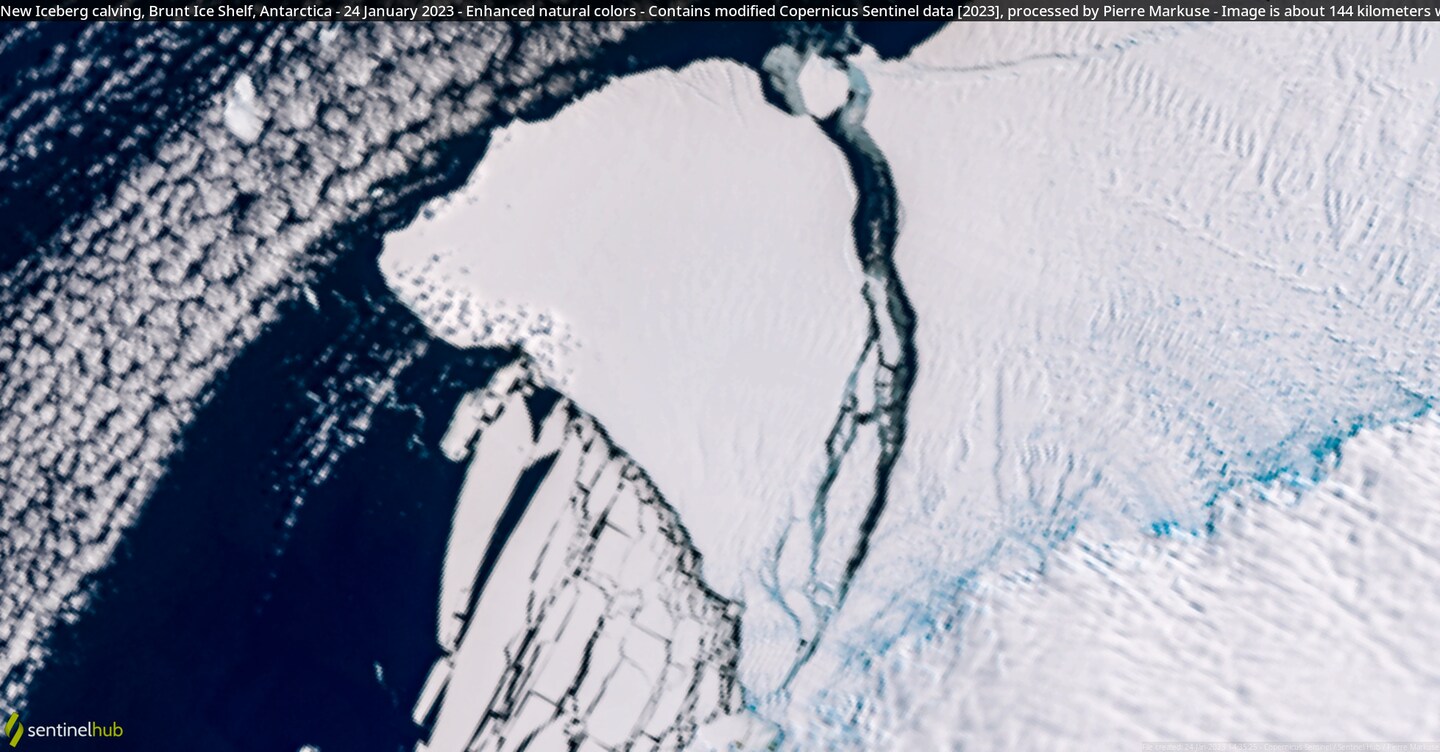 There’s a new iceberg off the coast of Antarctica. The yet-to-be-named, 600-square-mile iceberg broke away from the nearly 500-foot-thick Brunt Ice Shelf on Sunday during a particularly high tide known as a spring tide, according to a news release issued by the British Antarctic Survey (BAS).

The calving event is “part of the natural behaviour of the Brunt Ice Shelf” and “not linked to climate change,” BAS glaciologist Dominic Hodgson said in the news release.

Satellite imagery captured the break, which occurred about 10 years after satellite monitoring detected growth in a previously dormant crack in the ice known as Chasm-1, and almost two years after a slightly smaller iceberg named A74 separated from the same ice shelf. A chasm is a crack in the ice shelf that extends all the way from the surface to the ocean underneath, while an ice shelf is a floating piece of ice that extends from glaciers formed on land.

Ted Scambos, a senior research scientist at the University of Colorado at Boulder, wrote in an email that while the iceberg “is a huge mass of ice, about 500 billion tons … it is far from being the largest iceberg ever seen, which rivaled Long Island.”

The calving event is not expected to affect the BAS’s Halley Research Station, which was relocated further inland in 2016 as a precaution after Chasm-1 began to grow.

However, “the new fracture puts the base within about 10 miles of the ocean, and new cracking could occur over the next few years, forcing another expensive move of the station,” Scambos wrote. The new iceberg is expected to follow a similar path to that of A74 into the Weddell Sea and will be named by the U.S. National Ice Center.

Unlike some previous icebergs and collapsed ice shelves that have been linked to climate change, the BAS press release said the break is a “natural process” and there is “no evidence that climate change has played a significant role.”

Rather, the chasm started to grow due to “stresses building up … because of the natural growth of the ice shelf,” said Hilmar Gudmundsson, a glaciology researcher at Northumbria University, in a 2019 BBC story.

Scambos compares the calving of the iceberg to a chisel on a board of wood. “In this case the chisel was a small island called ‘MacDonald Ice Rise,’” Scambos wrote. “The ice was driven against this rocky seamount by ice flow, forcing it to split and eventually break off the floating ice shelf.”

“These large iceberg calvings, sometimes as large as a small state, are spectacular. But they’re just part of how Antarctica’s ice sheet works,” Scambos said. “Most of the time they have nothing to do with climate change.”

How To Kill An Abrams! Russian ‘Experts’ Issue A Guidebook On Where & How To Destroy The US Main Battle Tank