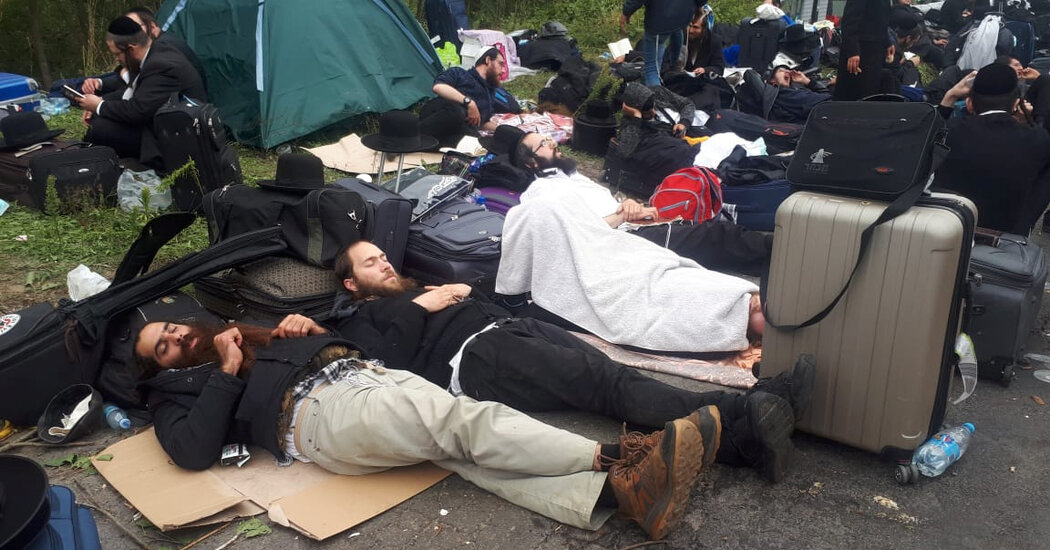 Hundreds of Jewish pilgrims seeking to travel from Belarus to Ukraine to visit the grave of a revered rabbi were barred from entering because of virus restrictions.

VINNYTSIA, Ukraine — They sang. They danced. They slumped in exhaustion on their luggage. For a second night in a row, hundreds of Hasidic Jewish pilgrims remained outdoors along a road between checkpoints on the border between Ukraine and Belarus on Tuesday, stranded by coronavirus travel restrictions.

Border guards in Ukraine have reinforced the crossing where the pilgrims are seeking to enter the country to celebrate Rosh Hashana, the Jewish New Year, in the city of Uman, site of the grave of Rabbi Nachman, the founder of the Breslov branch of Hasidic Judaism.

As Covid-19 cases in the country ticked up, Ukraine closed its borders last month, blocking the pilgrimage, which typically draws tens of thousands of people, many coming from Israel. Israeli health officials have supported Ukraine’s decision.

The pilgrims began arriving at a border crossing with Belarus on Monday afternoon, according to the Ukrainian border guard service. Authorities in Belarus let the group pass, and they gathered on a road in the buffer area between the two border stations.

The men tried to convince the border guards to let them through to celebrate the new year, the most important religious holiday for Hasidim. Little boys, looking bored and sleepy, stood by watching.

The pilgrims traveled to the Novi Yarylovychi border crossing after Belarus announced that it was open, Israel Public Broadcasting said in a tweet. But the border was shut. Ukrainian authorities said the pilgrims had been warned about the border closure beforehand.

Ukraine’s border guard service said that 690 pilgrims had gathered along the border by Tuesday, and the agency’s director, Serhiy Deyneko, said that more were expected on charter flights arriving in Belarus. Belarusian media reported a different number of pilgrims on the border, saying about 1,500 had already arrived.

President Volodymyr Zelensky of Ukraine, who is Jewish, said that the border closure would be enforced. “The State Border Service has enough forces and means for reliable protection of the state border,” a presidential office statement said. Guards were reinforcing the border with a secondary barrier, several hundred yards inside Ukraine.

Ukraine on Tuesday reported 2,905 new cases of coronavirus in the past 24 hours. The country’s ban on foreign visitors, instituted last month, is in place until Sept. 28.