As the presidential election approaches, very few polled in Canada, Europe, or the Asia-Pacific have confidence in Donald Trump to do the right thing regarding international affairs. 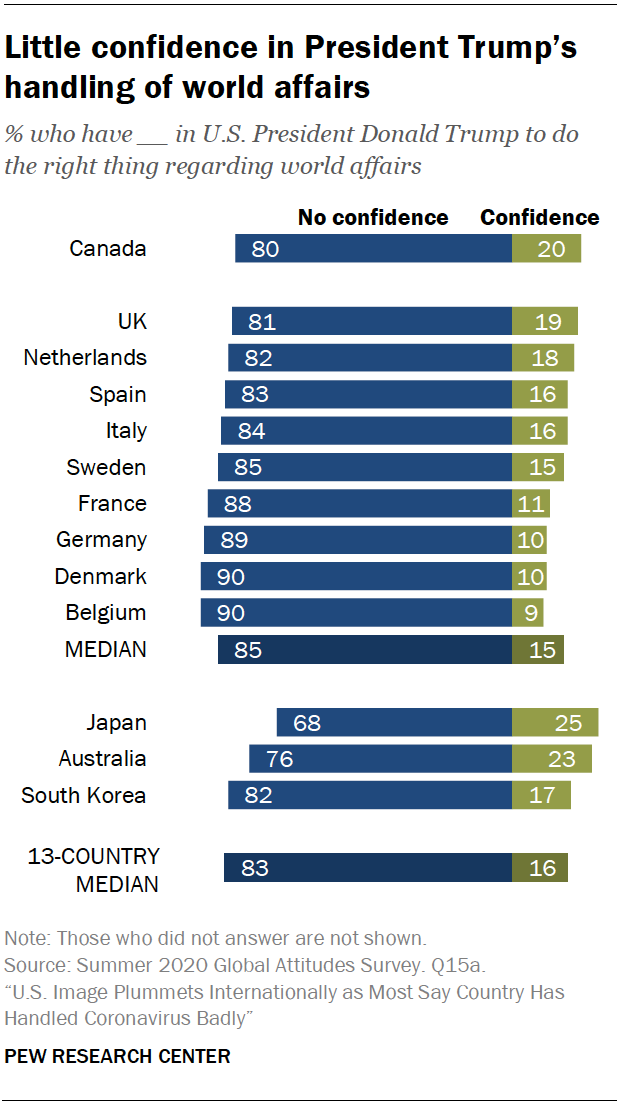 This analysis focuses on public opinion of the United States in 13 countries in North America, Europe and the Asia-Pacific region. Views of the U.S. and its president are examined in the context of long-term trend data. The report also examines how people in other countries perceive America’s handling of the coronavirus outbreak and how those perceptions compare to ratings for their own country, the World Health Organization, the European Union and China.

For this report, we use data from nationally representative surveys of 13,273 adults from June 10 to Aug. 3, 2020, in 13 advanced economies. All surveys were conducted over the phone with adults in Canada, Belgium, Denmark, France, Germany, Italy, the Netherlands, Spain, Sweden, the UK, Australia, Japan and South Korea.

Due to the coronavirus outbreak, face-to-face interviewing is not currently possible in many parts of the world, and so surveys were only conducted in countries with robust telephone polling operations.

Since Donald Trump took office as president, the image of the United States has suffered across many regions of the globe. As a new 13-nation Pew Research Center survey illustrates, America’s reputation has declined further over the past year among many key allies and partners. In several countries, the share of the public with a favorable view of the U.S. is as low as it has been at any point since the Center began polling on this topic nearly two decades ago.

For instance, just 41% in the United Kingdom express a favorable opinion of the U.S., the lowest percentage registered in any Pew Research Center survey there. In France, only 31% see the U.S. positively, matching the grim ratings from March 2003, at the height of U.S.-France tensions over the Iraq War. Germans give the U.S. particularly low marks on the survey: 26% rate the U.S. favorably, similar to the 25% in the same March 2003 poll.

Part of the decline over the past year is linked to how the U.S. had handled the coronavirus pandemic. Across the 13 nations surveyed, a median of just 15% say the U.S. has done a good job of dealing with the outbreak. In contrast, most say the World Health Organization (WHO) and European Union have done a good job, and in nearly all nations people give their own country positive marks for dealing with the crisis (the U.S. and UK are notable exceptions). Relatively few think China has handled the pandemic well, although it still receives considerably better reviews than the U.S. response.

Ratings for U.S. President Donald Trump have been low in these nations throughout his presidency, and that trend continues this year. Trump’s most negative assessment is in Belgium, where only 9% say they have confidence in the U.S. president to do the right thing in world affairs. His highest rating is in Japan; still, just one-quarter of Japanese express confidence in Trump.

Attitudes toward Trump have consistently been much more negative than those toward his predecessor, Barack Obama, especially in Western Europe. In the UK, Spain, France and Germany, ratings for Trump are similar to those received by George W. Bush near the end of his presidency.

The publics surveyed also see Trump more negatively than other world leaders. Among the six leaders included on the survey, Angela Merkel receives the highest marks: A median of 76% across the nations polled have confidence in the German chancellor. French President Emmanuel Macron also gets largely favorable reviews. Ratings for British Prime Minister Boris Johnson are roughly split. Ratings for Russian President Vladimir Putin and Chinese President Xi Jinping are overwhelmingly negative, although not as negative as those for Trump.

Views of Trump are more positive among Europeans who have favorable views of right-wing populist parties, though confidence is still relatively low among all groups. For instance, supporters of Spain’s Vox party are particularly likely to view Trump in a positive light: 45% are confident in his ability to handle international affairs, compared with only 7% among Spaniards who do not support Vox.

Ratings of America’s response to the coronavirus outbreak are also related to support for right-wing populist parties and political ideology within several countries. While ratings are low among both groups, those on the political right are more likely than those on the left to think the U.S. has done a good job handling the outbreak.