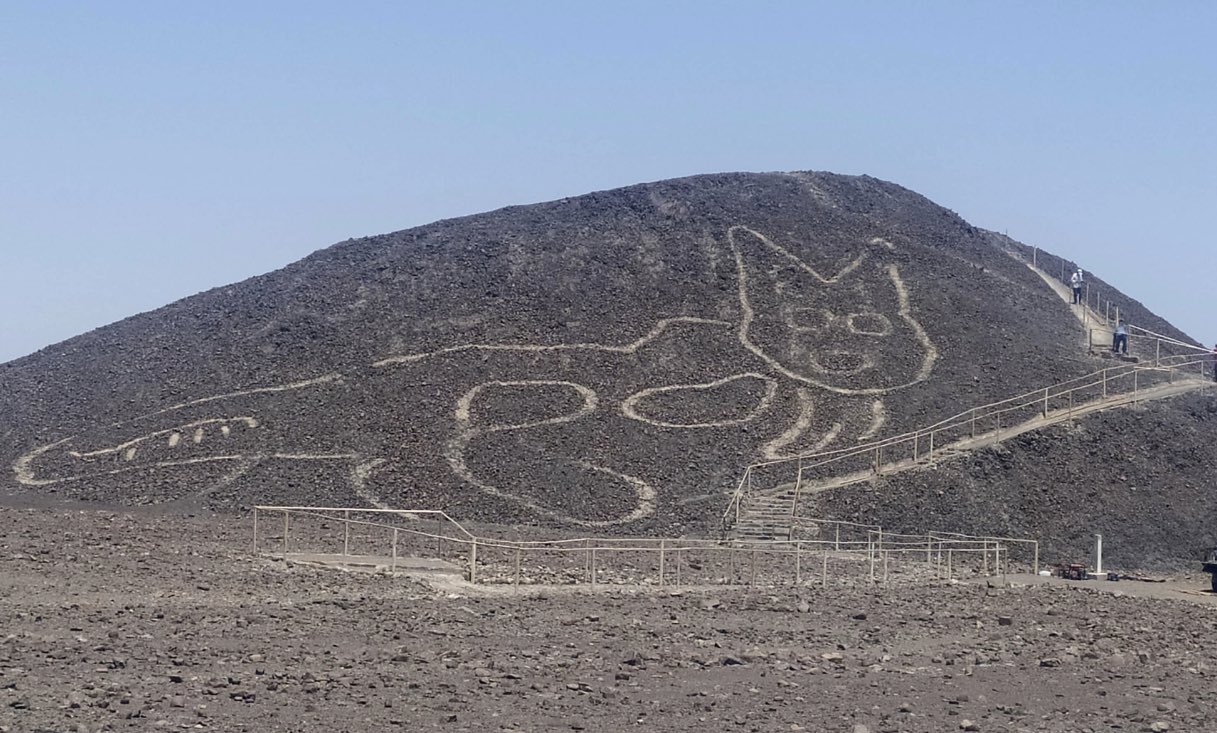 The dun sands of southern Peru, etched centuries ago with geoglyphs of a hummingbird, a monkey, an orca – and a figure some would dearly love to believe is an astronaut – have now revealed the form of an enormous cat lounging across a desert hillside.

The feline Nazca line, dated to between 200BC and 100BC, emerged during work to improve access to one of the hills that provides a natural vantage point from which many of the designs can be seen.

A Unesco world heritage site since 1994, the Nazca Lines, which are made up of hundreds of geometric and zoomorphic images, were created by removing rocks and earth to reveal the contrasting materials below. They lie 250 miles (400km) south of Lima and cover about 450 sq km (175 sq miles) of Peru’s arid coastal plain.

“The figure was scarcely visible and was about to disappear because it’s situated on quite a steep slope that’s prone to the effects of natural erosion,” Peru’s culture ministry said in a statement this week.

“Over the past week, the geoglyph was cleaned and conserved, and shows a feline figure in profile, with its head facing the front.” It said the cat was 37 metres long, with well-defined lines that varied in width between 30cm and 40cm.

“It’s quite striking that we’re still finding new figures, but we also know that there are more to be found,” Johny Isla, Peru’s chief archaeologist for the lines, told the Spanish news agency Efe.

Isla said between 80 and 100 new figures had emerged over recent years in the Nazca and Palpa valleys, all of which predated the Nazca culture (AD200-700). “These are smaller in size, drawn on to hillsides, and clearly belong to an earlier tradition.”

The archaeologist said the cat had been put out during the late Paracas era, which ran from 500BC to AD200. “We know that from comparing iconographies,” said Isla. “Paracas textiles, for example, show birds, cats and people that are easily comparable to these geoglyphs.”