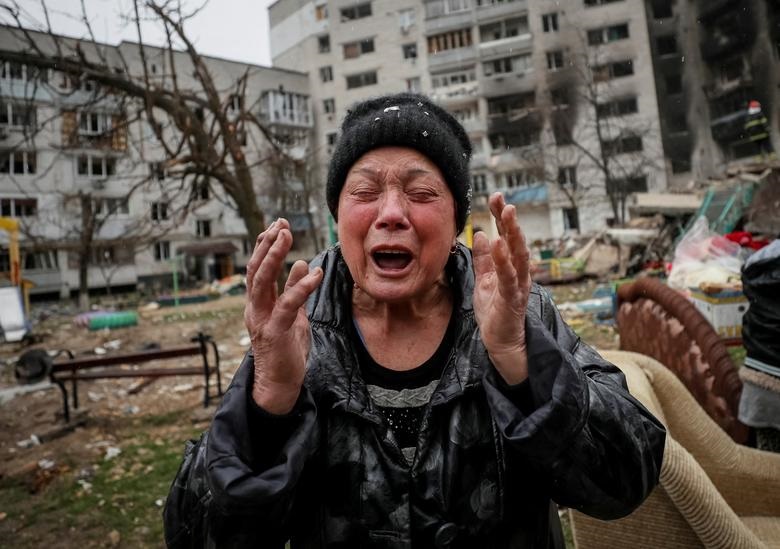 Ukrainian refugees from Mariupol region arrive by cars at a registration and humanitarian aid centre for internally displaced people, amid Russias ongoing invasion of Ukraine, in Zaporizhzhia, Ukraine May 14, 2022. REUTERS/Gleb Garanich

ZAPORIZHZHIA, Ukraine, May 14 (Reuters) - A large convoy of cars and vans carrying refugees from the ruins of Mariupol arrived in the Ukrainian-controlled city of Zaporizhzhia on Saturday after waiting days for Russian troops to allow them to leave.

Mariupol, now mostly Russian-controlled, has been flattened during the 80-day-old war. Ukraine has gradually been evacuating civilians from the devastated city for more than two months.

Refugees first had to get out of Mariupol and then somehow make their way to Berdyansk - some 80 km further west along the coast - and other settlements before the 200 km drive northwest to Zaporizhzhia.

Nikolai Pavlov, a 74-year-old retiree, said he had lived in a basement for a month after his apartment was destroyed. A relative using "secret detours" managed to get him out of Mariupol to Berdyansk.

"We barely made it, there were lots of elderly people among us ... the trip was devastating. But it was worth it," he said after the convoy arrived in the dark.

An aide to Mariupols mayor had earlier said the convoy numbered between 500 to 1,000 cars, representing the largest single evacuation from the city since Russias Feb. 24 invasion.

"We buried her next to her house, because there was nowhere to bury anyone," she said. For a time Russian authorities had not allowed large numbers of cars to leave, she said.

"My parents house was hit by an aerial strike, all the windows got blown out," said Yulia Panteleeva, 27, who along with other family members had been absent.

Moscow calls its actions a "special military operation" to disarm Ukraine and rid it of what it portrays as anti-Russian nationalism. Ukraine and the West say Russia launched an unprovoked war.

US Plans Economic Talks With Taiwan in Latest Challenge to China

Despite pain at the pump, Americans are hitting the road

Police in Brazil gas man to death in trunk of car, video appears to show