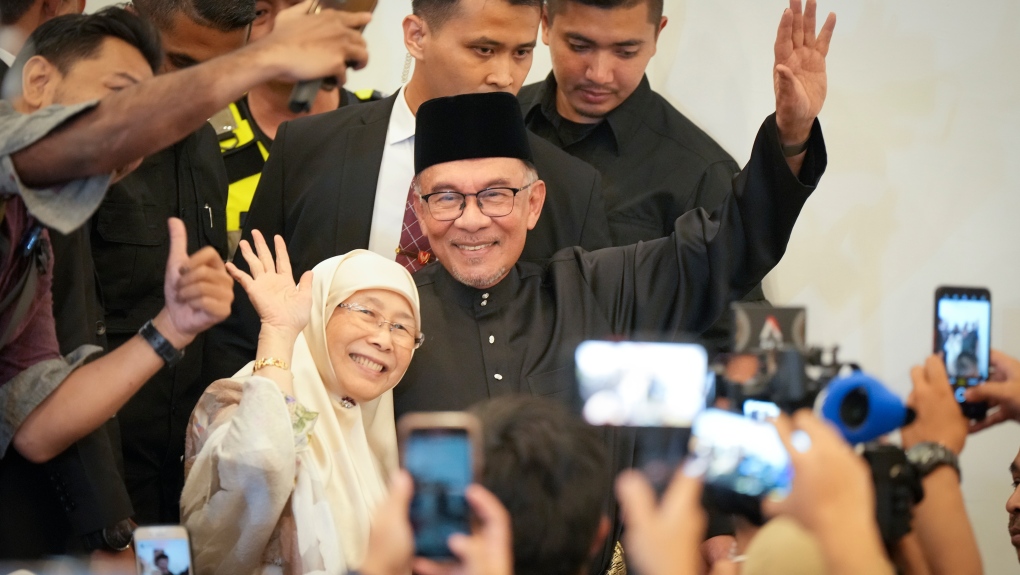 Long-time reformist leader Anwar Ibrahim was sworn in as Malaysias prime minister Thursday and vowed to heal a racially divided nation, fight corruption and revive an economy struggling with the rising cost of living.

His rise to the top a was a victory for political reformers who were locked in a battle with Malay nationalists for days after a divisive general election on Saturday produced a hung Parliament. Anwar took his oath of office in a simple ceremony at the national palace that was broadcast on national television.

Malaysias king, Sultan Abdullah Sultan Ahmad Shah, named Anwar as the nations 10th leader after saying he was satisfied that Anwar is the candidate who is likely to have majority support.

In his first news conference, Anwar said he would form a unity government comprising his Alliance of Hope that won 82 seats, the National Front with 30 seats and a bloc from eastern Sarawak state with 23 seats. He said that would give him a majority of 135 seats, with other smaller blocs expected to join.

"There is no question about my legitimacy," Anwar said after his rival, former Prime Minister Muhyiddin Yassin, disputed that he has majority support. Anwar said his government will propose a vote of confidence when Parliament reconvenes Dec. 19.

The stalemate was resolved after the National Front, led by the United Malays National Organization, agreed to support a unity government under Anwar. Such a tie-up was once unthinkable in Malaysian politics, long dominated by rivalry between the two parties.

"His Royal Highness reminds all parties that the winners do not win all and the losers do not lose everything," a palace statement said. Sultan Abdullah urged all opposing parties to reconcile to ensure a stable government and end Malaysias political turmoil, which has led to three prime ministers since 2018 polls.

Anwar said he wishes his victory will bring new hope for Malaysians longing for a more equitable nation, and assured majority Malay Muslims that they have nothing to fear. He said his priority will be to strengthen the economy as it faces an expected slowdown next year and fight rising inflation.

Many rural Malays fear they may lose their privileges with greater pluralism under Anwar. Fed up with corruption and infighting in the long-ruling UMNO, many opted for Muhyiddins bloc in Saturdays vote.

"Malaysia is more than six decades old. Every Malaysian regardless of ethnicity, religious belief or region, particularly Sabah and Sarawak, should not be left to feel that they are ignored in any way. None should be marginalized under my administration," he said. Sabah and Sarawak on Borneo Island are among two of the countrys poorest states.

Anwars rise to the top job caps his roller-coaster political journey and will ease fears over greater Islamization. But he faces a tall task in bridging racial divides that deepened after Saturdays poll, as well as reviving the economy. Malays form two-thirds of Malaysias 33 million people, which include large ethnic Chinese and Indian minorities.

Putin fell down stairs, soiled himself as speculation over worsening health grows: report