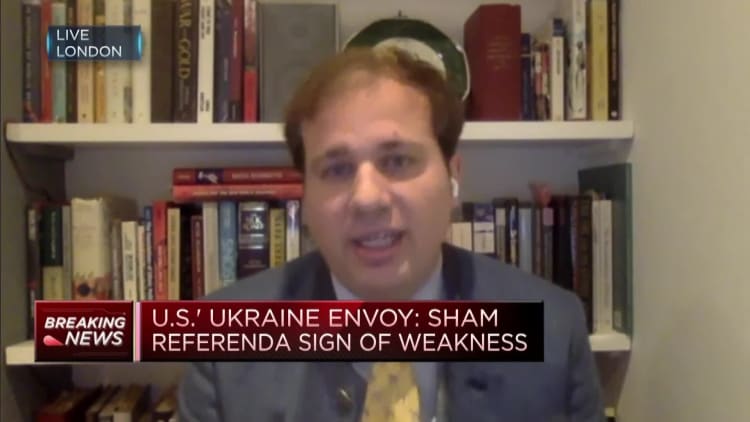 Speaking in a rare, televised address on Wednesday, Putin warned that if the territorial integrity of Russia is threatened, the Kremlin would “certainly use all the means at our disposal to protect Russia and our people. It is not a bluff.”

Russian President Vladimir Putin’s ultimatum to the West drastically increases the risk of a nuclear conflict, analysts and campaigners warned, with world leaders denouncing what they describe as “reckless” and “irresponsible” threats.

Speaking in a rare televised address on Wednesday, Putin called up extra forces for the war in Ukraine and warned that if the territorial integrity of Russia was threatened, the Kremlin would “certainly use all the means at our disposal to protect Russia and our people. It is not a bluff.”

Former Russian President Dmitry Medvedev on Thursday doubled down on the Kremlin’s nuclear posturing, saying that any weapons in Russia’s arsenal could be used to defend its territories — including strategic nuclear weapons.

It comes as pro-Moscow regional leaders in areas of southern and eastern Ukraine announced referendums on joining Russia. The votes are expected to take place in the Russia-controlled regions of Luhansk, Donetsk, Kherson and Zaporizhzhia, reportedly amounting to roughly 15% of Ukrainian territory.

The outcome of the referendums is widely believed to have been pre-determined by the Kremlin, prompting the U.S. and its allies to denounce them as a “sham.”

“The citizens of Russia can be sure that the territorial integrity of our Motherland, our independence and freedom will be ensured, I emphasize this again, with all the means at our disposal,” Putin said.

“Those statements go beyond the Russian nuclear doctrine, which only suggests Russian first use in a conventional war when the very existence of the state is threatened,” said Andrey Baklitskiy, a senior researcher in the weapons of mass destruction and other strategic weapons programme at the United Nations Institute for Disarmament Research.