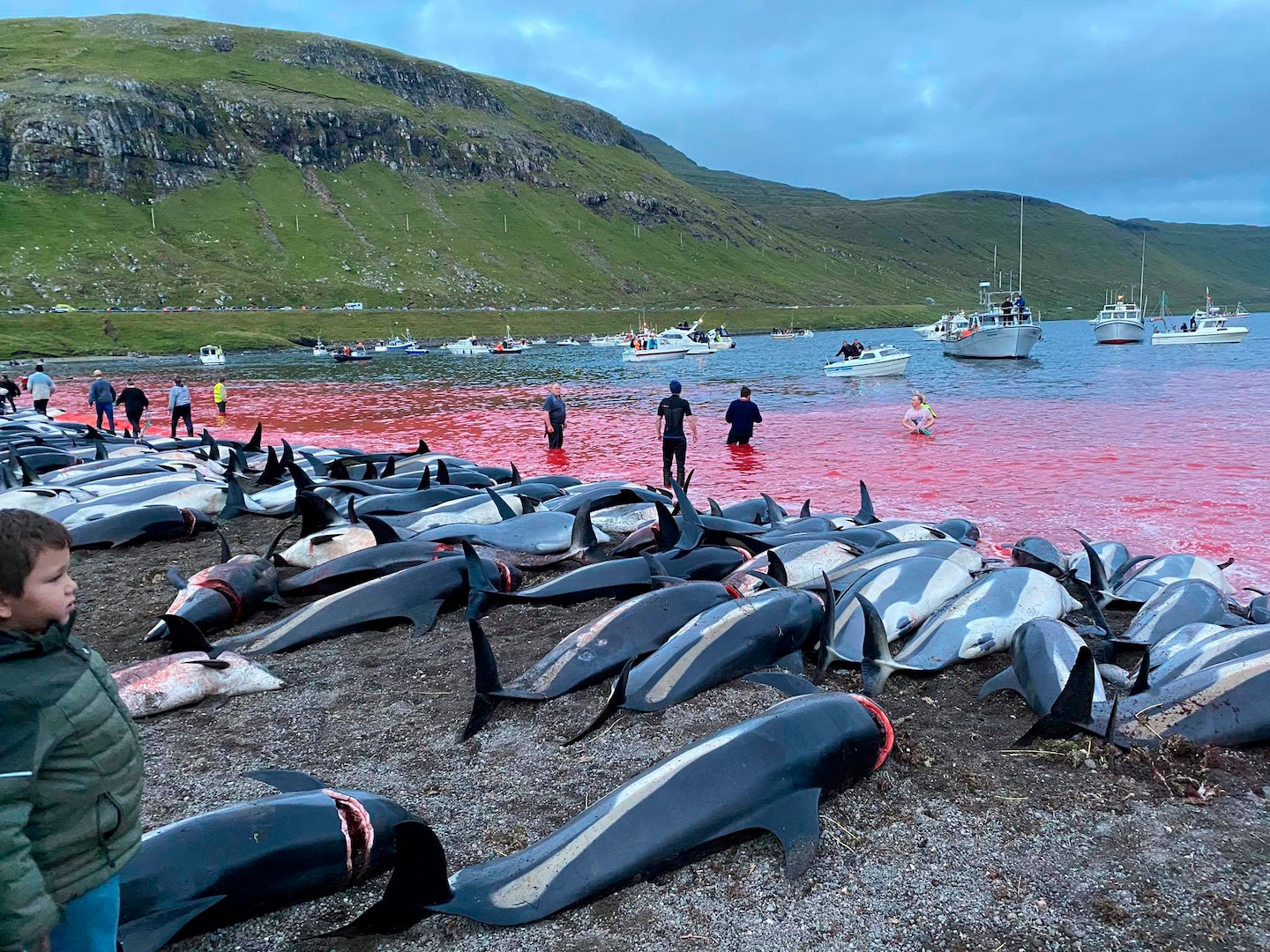 The slaughter of nearly 1,500 dolphins in the remote Faroe Islands has revived a debate about a centuries-old tradition that environmentalists condemn as cruel.

The pod of white-sided dolphins was driven into the largest fjord in the North Atlantic territory by hunters in speed boats and on water scooters on Sunday, where they were corralled into shallow waters and killed.

Many locals defend the hunt as an important local custom, with meat and blubber shared by the local community of the semi-independent Danish territory, which is located halfway between Scotland and Iceland.

But the size of this year’s hunt — which conservationists estimate is the largest in Faroese history, and possibly the largest single-day hunt ever worldwide — may be too much to feed the rocky archipelago’s population of around 50,000 people.

“Normally meat from a grindadrap is shared among the participants and any remainder among the locals in the district where the hunt took place,” the Sea Shepherd conservation group, which has been campaigning to stop the traditional Faroese “Grind” hunt since the 1980s, said. “However there is more dolphin meat from this hunt than anyone wants to take, so the dolphins are being offered to other districts in the hopes of not having to dump it.”

The chairman of the Faroese Whalers Association, Olavur Sjurdarberg, told the BBC that the hunters underestimated the size of the pod, only realizing their error when they began killing the dolphins.

“It was a big mistake,” said Sjurdarberg, who did not participate in the hunt. “When the pod was found, they estimated it to be only 200 dolphins.” He said most people were “in shock about what happened.”

Many Faroese consider whale and dolphin meat to be an important part of their food culture and history, dating back to when they first settled the remote islands, although even those who defend the practice worry the size of this year’s hunt will draw unwanted attention.

Killing white-sided dolphins is “legal but it’s not popular,” Sjurdur Skaale, a Danish lawmaker for the Faroe Islands, told the BBC. He visited the beach where the killings took place to speak to locals on Monday. “People were furious,” he said.

Sea Shepherd said the number of dolphins killed Sunday is approaching the Japanese government quota for the entire six-month capture and killing season at Taiji in Japan, which shot to global infamy in 2009 with the Oscar-winning documentary “The Cove,” and significantly exceeds the numbers actually killed there in recent years. Japan is another nation widely criticized by environmentalists for its whale kills.

“Considering the times we are in, with a global pandemic and the world coming to a halt, it’s absolutely appalling to see an attack on nature of this scale in the Faroe Islands,” said Alex Cornelissen, the chief executive of Sea Shepherd, which campaigns against whaling globally. “If we have learned anything from this pandemic, [it] is that we have to live in harmony with nature instead of wiping it out.”