Solomon Islands: Why Are People Protesting? 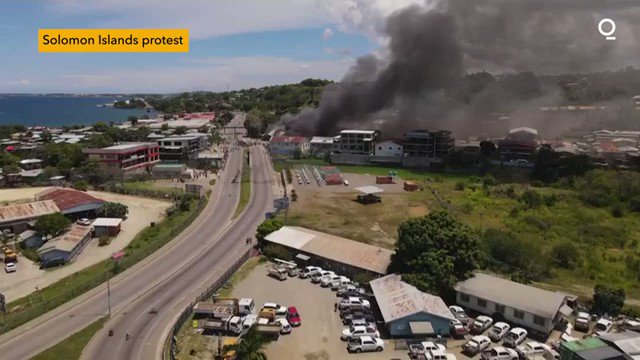 Violence shook the capital of the Solomon Islands for a second day despite a lockdown, with protesters targeting buildings in Chinatown as the nation’s embattled leader vowed to hold the perpetrators accountable and Australia said it would send troops to quell the unrest.

Smoke continued to billow over Honiara on Thursday, a day after protesters demanding the resignation of the prime minister set fire to Parliament and several other buildings.

The escalating riots led Prime Minister Manasseh Sogavare to call on neighboring Australia for help, with his Australian counterpart announcing the country would send around 120 soldiers and police officers to keep the peace.

“Our purpose here is to provide stability and security to enable the normal constitutional processes in the Solomon Islands,” Scott Morrison said in a news conference Thursday evening. “It is not the Australian government’s intention in any way to intervene in the internal affairs of the Solomon Islands. That is for them to resolve.”

Morrison said two dozen Australian police officers were already on their way to Honiara, where they would soon be joined by more than 40 soldiers and 50 additional police. He said the deployment would likely last “a matter of weeks.”

In a national address late Wednesday, Sogavare called the riots a “sad and unfortunate event aimed at bringing a democratically elected government down” and announced a 36-hour lockdown to allow authorities to investigate.

“Hundreds of citizens took the law into their own hands today,” he said, claiming they had been “led astray by a few unscrupulous people” whom he did not name but said would soon “face the full brunt of the law.”

Many of the protesters came to Honiara, on the island of Guadalcanal, from Malaita, the most populous island in the archipelagic nation in the South Pacific, about 1,000 miles from the northeast coast of Australia.

Tensions have simmered between the two islands since the national government switched diplomatic allegiance from Taiwan to China in 2019, a move opposed by Malaita’s premier, Daniel Suidani, who claimed he had been offered a bribe to support the switch. Sogavare denied the accusation.

Suidani pledged Malaita would never engage with Beijing and terminated licenses of businesses owned by ethnic Chinese, drawing a rebuke from the national government. Tensions grew in May when Suidani sought medical treatment in Taiwan, a trip the government said was “unauthorized.”

On Tuesday, members of Parliament from Malaita put out a statement expressing fear over planned protests in Honiara and calling on Suidani to “recall our people, our brothers and sons from carrying out such a potentially dangerous and violent actions.”

Suidani said the protests, which he did not attend, were the result of the government ignoring the people’s concerns over a range of issues, including the diplomatic switch and infrastructure projects.

“Whatever the government wants the people to know, they must stand and tell them,” he told the Guardian on Wednesday amid the rioting. “They cannot run away from problems. It will not solve anything.”