The Umbrella Academy Recap: The Ghost With the Most

The Umbrella Academy Recap: The Ghost With the Most 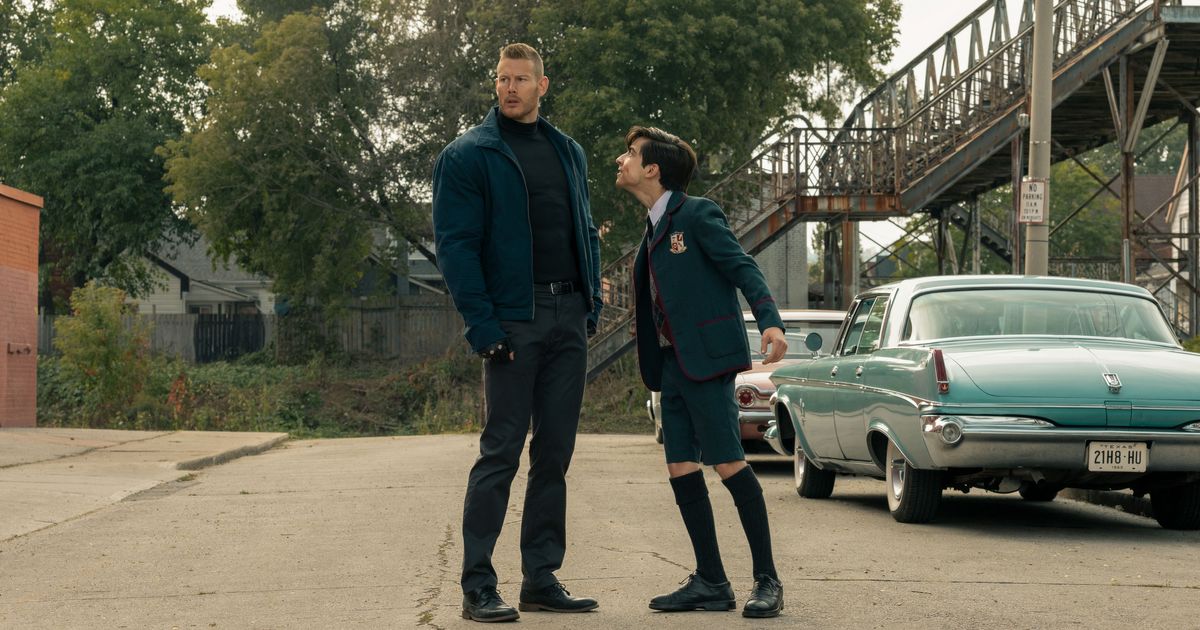 Despite setting most of the story in Dallas circa 1963 — with the JFK assassination looming on the horizon — Umbrella Academy spent the first few minutes of its second season setting up some very familiar stakes: an apocalypse that could only be prevented if the Umbrella Academy could figure out what caused it, and how to stop it, in a matter of days.

So this climactic episode is both a delight and a relief: a signal that, after a bit of water-treading, Umbrella Academy is ready to let both its story and its characters grow past the archetypes established on season one. It could easily have gone the other way. Once again, Vanya has snapped, and once again, the collateral damage might turn out to be the end of the world. And when Allison, Diego, and Klaus each fail to reach Vanya and stop the “attack” — which is actually more like a super-powered spasm triggered by Vanya’s physical and emotional pain — it looks like the best hope for the future of Earth might be another deck-clearing time jump.

And then an unlikely hero emerges: ghostly brother Ben, who manages to penetrate Vanya’s psychic defenses and find her, scared and alone, within her own mind. As Vanya relives the horrors of the past, Ben gets through to her — not by imprisoning her, as his siblings once did, but by reassuring her that all those horrible things weren’t her fault. “Dad treated you like a bomb before you ever were one,” he says. “You aren’t a monster. You’re my sister.”

It’s enough to get through to Vanya, but it comes with a cost: The effort Ben had to expend to reach Vanya means that, 17 years after his “death,” it’s time for Ben to die for real. I’m not 100 percent clear on why this is the case — but on an intuitive level, it feels like the right sendoff. And while I’ve accused Umbrella Academy of being reluctant to embrace big emotions, it certainly succeeds here, as Ben expresses gratitude for this actual good-bye, and asks Vanya to hug him while he fades away. Vanya, for her part, seems to internalize Ben’s love and understanding, which should hopefully preclude any more uncontrolled appearances from the White Violin.

Back in the real world, Vanya snaps back to normal, and the season-defining crisis seems to be averted. Without Vanya’s explosion spooking JFK and escalating the Cold War, the timeline is restored.

Which means, unfortunately, that JFK is still assassinated. Five’s role in the whole thing is ultimately a red herring; despite a lengthy, wacky brawl with Other Five, neither of them plays a meaningful role in the assassination. Diego’s attempt to stop the assassination is another failure, though for a brief moment it looks like he might actually succeed. But when he tackles “Reginald Hargreeves” on the grassy knoll, it turns out to be a decoy. The fatal bullet arrives from somewhere else, and the president is killed.

Diego will surely assume that the assassination was another of the warped schemes masterminded by his father (and maybe someday he’ll even get to confront him about it). But unbeknownst to Diego, and Grace, and anyone else who suspected Reginald of foul play related to JFK, the truth turns out to be more complicated. When Reginald storms into a Majestic-12 meeting in a fury, he reveals that he only participated in the JFK assassination plot on the condition that JFK wouldn’t actually be hurt.

And when the smug members of Majestic-12 laugh at him, Reginald — and honestly, I cannot emphasize this enough — removes his rubber mask to reveal he is an alien. Yes: Reginald Hargreeves has been an alien in disguise all along, and now he is one seriously pissed-off alien. The camera only teases us with the back of his alien head and some horrifying sounds from off-screen, but it certainly sounds like he’s slaughtering a bunch of smug guys in suits.

You’d think the murder of, I don’t know, everybody in Majestic-12 would be a world-shaking anomaly in the timeline, so it’s not exactly surprising when a world-shaking anomaly is detected by a Commission operative at the end of the episode. But Umbrella Academy has one last twist in store. For all of the crazy things that have happened in Dallas since the Umbrella Academy arrived, the truly unprecedented anomaly doesn’t directly involve any of them. It’s back at Sissy’s farm, where Harlan uses his newly awakened superpower to propel a wayward bullet directly at Carl, hitting him in the chest and killing him.

And apparently, that was only the beginning, because The Commission’s monitor shows that the entire barn has subsequently lit up with a strange blue glow. It’s not exactly clear what’s happening inside — but given that it set off a bigger alarm inside The Commission than either of Umbrella Academy’s two apocalypses, it’s probably safe to assume there are some big things coming in the season finale.

• Reginald Hargreeves is revealed to be an alien in literally one of the first panels of the Umbrella Academy comics — but apart from a strange flashback scene involving rockets near the end of season one, the TV show has been a lot more evasive about his true identity. Now that it’s finally out in the open, here’s hoping a third season will get into Reginald’s real goal, which apparently involves the dark side of the moon.

• I’m assuming that’s a wrap on Ben, and on actor Justin H. Min, who was bumped up to a series regular for Umbrella Academy season two after occasional appearances in season one. I still think the show might have found more for him to do, but his banter with Klaus was reliably funny, and Min managed to find the poignancy in a dead boy getting a second shot at the experiences he missed in life. I’ll miss him if Umbrella Academy returns for season three.

• Stuck in a fishbowl on the Handler’s desk, A.J. Carmichael attempts to strike a decisive blow by leading Lila to a file that reveals her parents’ death was an assassination ordered by the Commission. Unfortunately, Lila fails to realize that the Handler played a key role in the decision, blaming Carmichael (whose name was used to rubber-stamp the order) and Five (who carried out the hit).