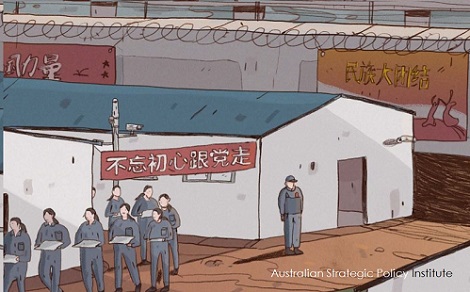 In March 2020 Patently Apple (PA) posted a report titled "China sells Muslim minority workers to Factories making U.S. Products for Apple, Nike, Adidas and others." It was noted in the report that dozens of popular companies including Apple, Nike, Adidas, Uniqlo and Skechers had suppliers linked to forced labor in China involving Muslim minorities such as Uyghurs and Kazakhs, according to a new report from the Australian Strategic Policy Institute (ASPI). In July PA posted another report on this issue titled: "Apple Denies a report that one of their Chinese Suppliers are using Uyghur slave labor on Production Lines." Its an issue that wont go away.

Were now learning in a new damning Washington Post report that "Apple lobbyists are trying to weaken a bill aimed at preventing forced labor in China, according to two congressional staffers familiar with the matter, highlighting the clash between its business imperatives and its official stance on human rights.

The Uyghur Forced Labor Prevention Act would require U.S. companies to guarantee they do not use imprisoned or coerced workers from the predominantly Muslim region of Xinjiang, where academic researchers estimate the Chinese government has placed more than 1 million people into internment camps.

Apple is heavily dependent on Chinese manufacturing, and human rights reports have identified instances in which alleged forced Uighur labor has been used in Apple’s supply chain.

The staffers, who spoke on the condition of anonymity because the talks with the company took place in private meetings, said Apple was one of many U.S. companies that oppose the bill as it’s written. They declined to disclose details on the specific provisions Apple was trying to knock down or change because they feared providing that knowledge would identify them to Apple. But they both characterized Apple’s effort as an attempt to water down the bill.

Cathy Feingold, director of the international department for the AFL-CIO: What Apple would like is we all just sit and talk and not have any real consequences. They’re shocked because it’s the first time where there could be some actual effective enforceability.