The World Got Diamonds A Mining Town Got Buried in Sludge

Waste from a diamond mine in South Africa grew ever higher as the ownership changed. The mining town paid the price.. 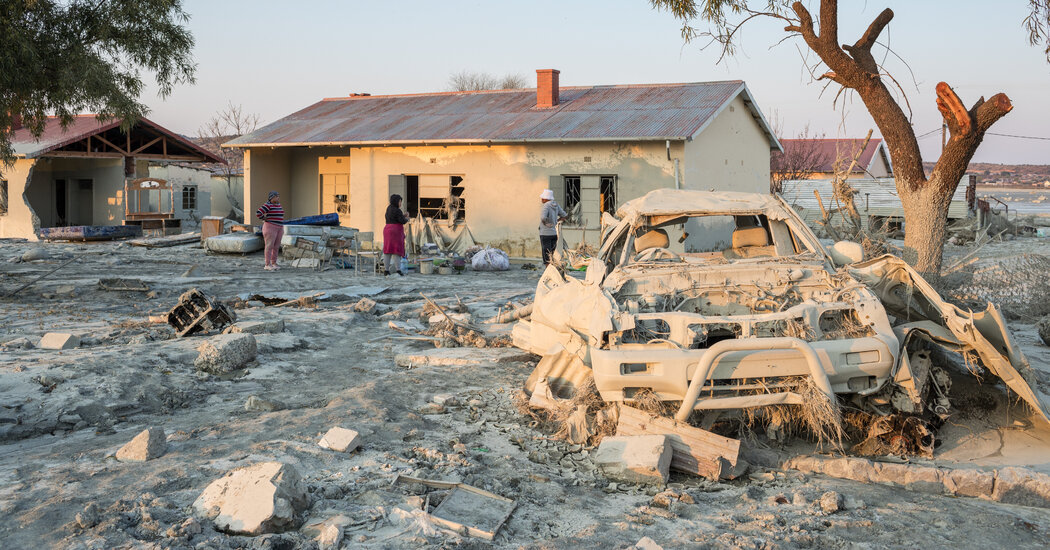 Waste from a diamond mine in South Africa grew ever higher as the ownership changed from De Beers to a billionaire to a Dubai-based retailer. The mining town paid the price.

When a dam at a diamond mine burst in September in Jagersfontein, South Africa, it coated houses, cars and possessions in six miles of muck. At least one person died.Credit...

JAGERSFONTEIN, South Africa — The dirt wall holding in mucky waste from diamond mining grew over the years to resemble a wide, towering plateau. Suspended like a frozen tsunami over neat tracts of Monopoly-like homes in the rural South African mining town of Jagersfontein, the dam alarmed residents who feared it may collapse.

The worst fears of residents came true this month when a section of the dam crumbled, sending a thunderous rush of gray sludge through the community that killed at least one person, destroyed 164 houses, and turned a six-mile stretch of neighborhoods and grassy fields into an ashen wasteland.

The Jagersfontein disaster has caused alarm in a nation where heaping dams of mining waste, known as tailings, are part of the landscape. Experts estimate that South Africa has hundreds of tailings dams, which mining watchdogs say is the legacy of an exploitative industry that extracts lucrative gems for jewelry stores abroad, while poor communities are saddled with toxic waste at home.

The townspeople in Jagersfontein, home to one of the world’s oldest diamond mines, had watched the wall of waste mount, looming over their homes and streets. But there was little they could do to stop it because it was big business.

A consortium that bought the mining waste from the mine’s former owner, De Beers, was sifting through the tailings to extract any diamonds left behind — an increasingly popular offshoot of mining. In doing so, the operation was piling up even more waste, and government oversight was lax. Some mine workers were scared when their colleagues reported finding leaks in the dam.

“It was definitely avoidable,” said Mariette Liefferink, chief executive of the Federation for a Sustainable Environment, an environmental organization focused on mining. “The damage to the ecosystem, to human lives, to future generations — the risks are significant.”