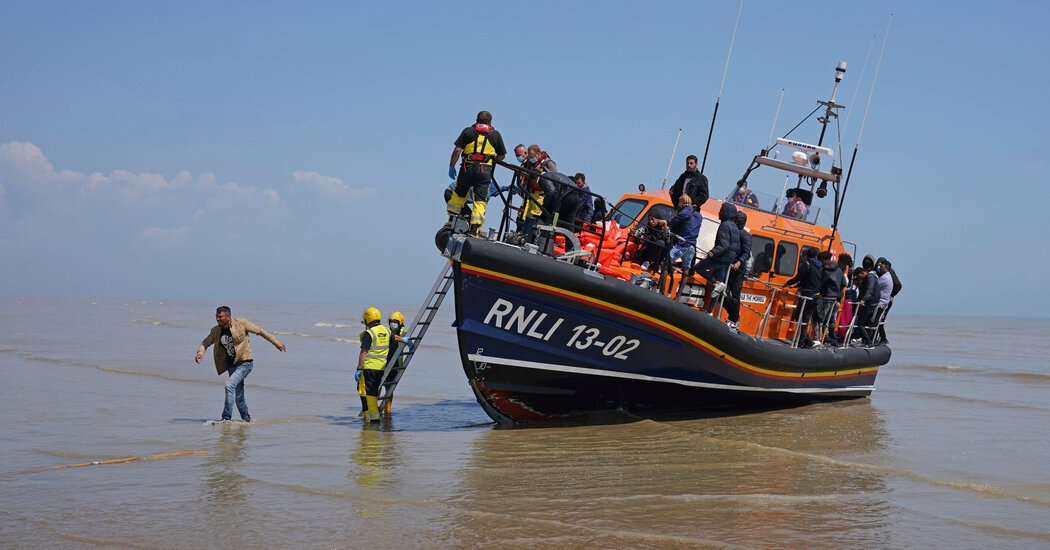 The deal, which covers increased patrols by French security forces, comes amid an uptick in arrivals on the English coast, even though overall asylum applications in Britain are down this year.

LONDON — Britain has agreed to pay France 54 million pounds, about $73 million, to help clamp down on migrants crossing the English Channel by boat, despite the failure of similar attempts last year to significantly stem the number of arrivals taking that route.

The arrangement comes as hundreds of migrants arrived on the English coast in small boats this week, according to the Home Office — a sharp uptick — and as Britain considers introducing the threat of prison sentences for migrants who arrive in that way.

As part of the British-French agreement, reached on Tuesday, France will “be able to respond by posting more security forces further up the coast, installing and utilizing the latest surveillance equipment throughout northern France,” said the Home Office, which oversees Britain’s immigration policies.

The arrivals this week amounted to a high this year for the number of daily crossings by boat, according to local news outlets. But migration experts and rights groups emphasize that overall asylum applications in Britain are down this year and that the increase through the English Channel reflects a shift in routes rather than a surge in migration.

About 430 people arrived in Britain on 14 boats on Monday, and another 287 aboard 12 on Tuesday, according to the official figures. The Home Office declined to note the total number of people arriving by the route, but The Times of London, which has been tracking the situation, said the number had risen to 8,474 this year.

Last year, Britain and France similarly agreed to funding for increased patrols intended to thwart the small-boat arrivals, but the numbers have continued to rise. Lawmakers raised that point with the British home secretary, Priti Patel, in a parliamentary committee meeting on Wednesday.

The day before, the British Parliament approved a new immigration plan, the Nationality and Borders Bill, which could subject some people arriving by boat to up to four years in prison. The legislation, which will take months to come into effect, was approved on a vote of 366 to 265, despite being denounced by the opposition Labour Party.

The bill was introduced by Ms. Patel this month as the government’s latest effort to “fix the broken asylum system,” as the Home Office has described it. Opposition politicians and rights groups have denounced the plan as inhumane, divisive and flawed.

The measure makes a distinction between people who arrive in the country through resettlement programs and those who arrive by other means, a separation that the United Nations refugee agency described as a discriminatory two-tier system. The agency also expressed concern that the bill, if implemented without changes, would undermine the “international protection system, not just in the U.K., but globally.”