Latest in the east: what the NYT calls seesaw fighting, as Ukrainian counteroffensive gains territory around Kharkiv in the northeast; while Russia captures the town of Popasna in the eastern Luhansk region.. 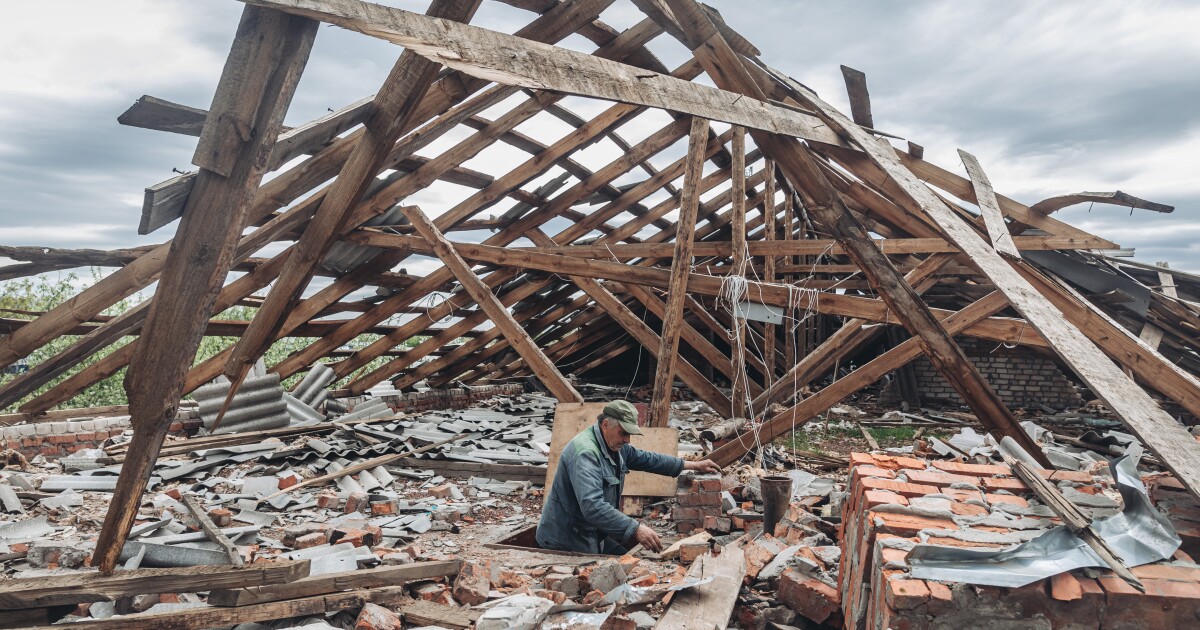 Jill Biden, the first lady, met with the wife of President Volodymyr Zelensky, and G7 leaders moved to cut off the purchase of oil from Russia. Officials said a Russian airstrike had hit a school building being used as a shelter.

PARIS — On a day of commemoration of the end of World War II in Europe, the war in Ukraine was marked by posturing and signaling on Sunday, as each side ramped up its rhetoric and resolve.

Leaders of the world’s wealthiest democracies vowed to end their dependence on Russian energy and ensure that Russia does not triumph in its “unprovoked, unjustifiable and illegal aggression,” as President Vladimir V. Putin pursued his indiscriminate bombardment of eastern Ukraine and orchestrated celebrations for Russia’s Victory Day holiday on Monday.

A statement by the Group of 7 major industrialized nations said that on a day when Europe recalled the devastation of World War II and its millions of victims, including those from the Soviet Union, Mr. Putin’s “actions bring shame on Russia and the historic sacrifices of its people.”

The leaders, signaling to Mr. Putin that their unrelenting support of Ukraine would only grow, said, “We remain united in our resolve that President Putin must not win his war against Ukraine.” The memory of all those who fought for freedom in World War II, the statement said, obliged them “to continue fighting for it today.”

In Moscow, as fighter jets streaked across the sky and nuclear weapons were put on display in preparation for Victory Day, Mr. Putin appeared to signal back to Western leaders that he was determined to double down on the war until he could conjure something that might be claimed as victory.

There was fresh evidence of that on Sunday, as rescuers picked through the rubble in Bilohorivka, a village in the Luhansk region of eastern Ukraine where a Russian bomb had flattened a school building the day before, killing people sheltering there, local authorities said.

“Most likely, all 60 people who remain under the rubble are now dead,” Gov. Serhiy Haidai wrote on the Telegram messaging app. But it was unclear how many people were in fact in the school and that toll may prove inflated. If confirmed, it would be one of the deadliest single Russian attacks since the war began in February.

Despite the World War II commemorations in most of Europe on Sunday and in Russia on Monday, a painful reminder of the tens of millions of people killed, there was no indication that the war in Ukraine was anywhere near ending. If anything, all signals pointed in the opposite direction. Russian attacks on Ukrainian towns and villages met a crescendo of Western rhetoric, accompanied by the constant danger of escalation.

Mr. Putin, whose steady militarization of Russian society in recent years has turned the May 9 celebration of the Soviet defeat of the Nazis into an annual apotheosis of a resurgent nation’s might, is expected to portray a war of repeated setbacks in Ukraine as a successful drive to “de-Nazify” a neighboring nation whose very existence he denies.

His much-anticipated speech may go further, possibly signaling that whatever conquest in Ukraine there has been up to now will become permanent through annexation. Russia annexed Crimea in 2014 and began stirring military conflict in the eastern Donbas region.

In Mariupol, the Ukrainian port city now in ruins after sustained Russian assault, and a place Mr. Putin wants to showcase as evidence of his “victory,” the city’s last Ukrainian defenders vowed to fight on. Russian forces were cleaning the streets on Sunday in possible preparation for a celebratory parade on Monday.

US preparing to approve advanced long-range rocket system for Ukraine