Ukrainian general says war will be over by year-end; McConnell meets with Zelenskyy in Kyiv

🔥🔥🔥 Ukrainian general says war will be over by year-end; McConnell meets with Zelenskyy in Kyiv 🔥🔥🔥 #Russia_attacks_Ukraine #Ukraine. 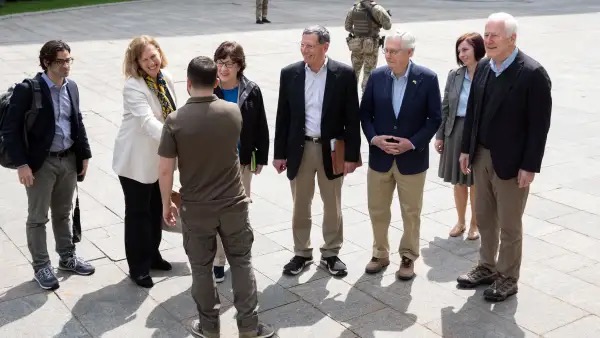 During the meeting, he stressed the importance of financial institutions implementing U.S. sanctions and emphasized Treasury’s focus on preventing sanctions evasion. Adeyemo warned of the risks of violating the bans.

Treasury’s Office of Foreign Assets Control (OFAC) expects all financial institutions to do their own due diligence to ensure they are not transacting with a sanctioned person, he said.

Workers unload wheat sacks from a truck at a Punjab Grains Procurement Corp. facility in the Ludhiana district of Punjab, India, on Sunday, May 1, 2022.

India banned exports of wheat on Saturday amid surging global prices because of disruption from the Russia-Ukraine war, according to a government notification.

“The government of India is committed to providing for the food security requirements of India, neighbouring and other vulnerable developing countries which are adversely affected by the sudden changes in the global market for wheat,” the notice read.

Wheat prices have soared by 53% this year in Chicago trading following the Russian invasion of Ukraine. Hotter temperatures in India has further boosted wheat prices locally and raised inflation concerns.

Biden says Finland and Sweden have full, total, complete backing of US as they seek to join NATO