Protesters are demanding the withdrawal of UN forces from the Congo for failing to rein in rebel groups in the east who mastermind lethal attacks against civilians.. 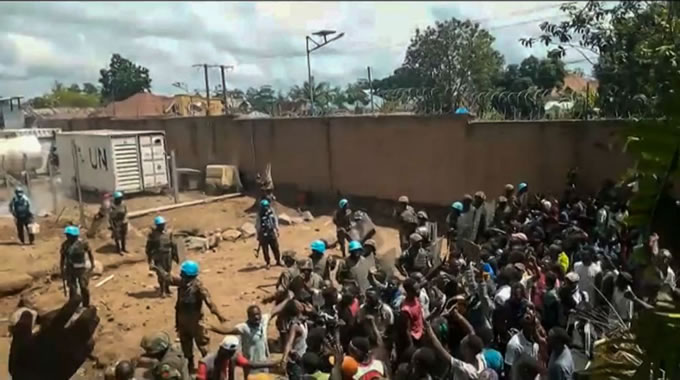 Two decades ago, a UN force landed in the Democratic Republic of Congo (DRC) to keep the peace in a volatile territory almost overrun by armed militias. But with the insurgents still on the prowl, locals say the peacekeepers have outstayed their welcome.

Since July 25, anti-UN protests have raged on in the DRC’s eastern region, with 36 people – including four peacekeepers – dead and 170 wounded as of Wednesday, the DRC government told CNN.

Protesters are demanding the withdrawal of UN forces from the central African country for failing to rein in rebel groups in the east who mastermind lethal attacks against civilians.

Last month, soldiers attached to the United Nations Organization Stabilization Mission in the Democratic Republic of the Congo, also known as MONUSCO, were accused of firing live rounds at demonstrators as they battled to contain violent protesters who “attacked and looted” UN buildings, according to Reuters.

In another shooting incident on Sunday, two UN soldiers were accused of opening fire at a border post between Uganda and the DRC, killing two people and injuring 15 others, a DRC government spokesman told CNN Monday.

“There was an accident at the border between Uganda and the DRC yesterday (Sunday),” said DRC’s communications minister and government spokesperson Patrick Muyaya.

“Some UN peacekeepers came back from vacation and when they got to the border, the (DRC) immigration service told them to come back after three days … because there is a lot of pressure at the moment in the DRC. But they decided to force their way through and started shooting. Two people died and 15 people were wounded.”

The MONUSCO force in a statement described the actions of its personnel involved in the shooting as “unspeakable and irresponsible behavior,” adding that the officers had been arrested and were being investigated.

“Contacts have also been established with the country of origin of these soldiers so that legal proceedings be initiated urgently with the participation of victims and witnesses…,” the statement added.

What began as a “small observer mission,” in 1999 with a small deployment of 90 soldiers, transformed into the “UN’s largest and most robust operation,” and by 2000, the UN Security Council had authorized more than 5000 military personnel for the MONUC force to the DRC.

The DRC has grappled with decades-long militia violence as state forces struggle to rein in rebel groups. Fighting between government troops and the M23 rebel group, which seeks control of the country from its stronghold in eastern DRC, has left many dead and displaced thousands.

“People are upset and tired of UN peacekeepers in the DRC because they have been here for the past 20 years but the security situation hasn’t changed a lot,” he said.

What to Make of North Koreas Twisted COVID Revenge Threat

As US Seeks to Close Guantánamo, Saudi Center Could Be Option

A Statue of a Sex Worker Is a Top Attraction in This German City
© tweet247.net 2022