The Biden administration has been sending messages to Moscow about the grave consequences that would follow the use of a nuclear weapon in Ukraine.. 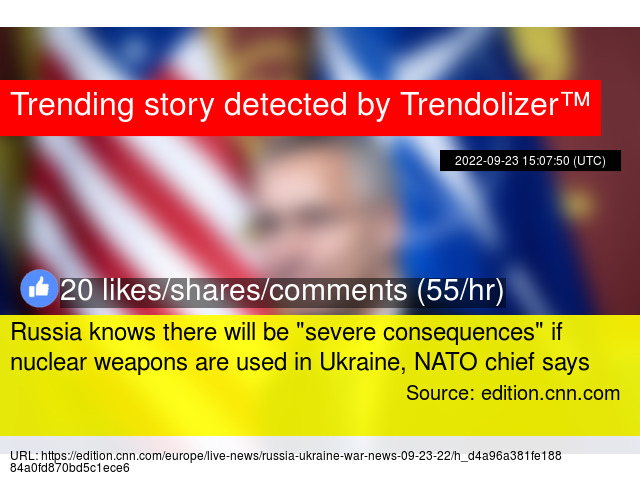 The United States for several months has been sending private communications to Moscow warning Russia’s leadership of the grave consequences that would follow the use of a nuclear weapon, according to U.S. officials, who said the messages underscore what President Biden and his aides have articulated publicly.

The Biden administration generally has decided to keep warnings about the consequences of a nuclear strike deliberately vague, so the Kremlin worries about how Washington might respond, the officials said, speaking on the condition of anonymity to describe sensitive deliberations.

The attempt by the White House to cultivate what’s known in the nuclear deterrence world as “strategic ambiguity” comes as Russia continues to escalate its rhetoric about possible nuclear weapons use amid a domestic mobilization aimed at stanching Russian military losses in eastern Ukraine.

The State Department has been involved in the private communications with Moscow, but officials would not say who delivered the messages or the scope of their content. It was not clear whether the United States had sent any new private messages in the hours since Russian President Vladimir Putin issued his latest veiled nuclear threat during a speech announcing a partial mobilization early Wednesday, but a senior U.S. official said the communication has been happening consistently over recent months.

Dmitry Medvedev, deputy chairman of Russia’s Security Council, wrote Thursday in a post on Telegram that territory in eastern Ukraine would be “accepted into Russia” after the completion of staged “referendums” and vowed to strengthen the security of those areas.

To defend that annexed land, Medvedev said, Russia is able to use not only its newly mobilized forces, but also “any Russian weapon, including strategic nuclear ones and those using new principles,” a reference to hypersonic weapons.

The comment came a day after Putin suggested Russia would annex occupied lands in Ukraine’s south and east, and incorporate the regions formally into what Moscow considers its territory. He said he was not bluffing when he vowed to use all means at Russia’s disposal to defend the country’s territorial integrity — a veiled reference to the country’s nuclear arsenal.

Biden administration officials have emphasized that this isn’t the first time the Russian leadership has threatened to use nuclear weapons since the start of the war on Feb. 24, and have said there is no indication Russia is moving its nuclear weapons in preparation for an imminent strike.

Still, the recent statements from the Russian leadership are more specific than previous comments and come at a time when Russia is reeling on the battlefield from a U.S.-backed Ukrainian counteroffensive.

Whereas previous Kremlin statements appeared to be aimed at warning the United States and its allies against going too far in helping Ukraine, Putin’s most recent comments suggested Russia is considering using a nuclear weapon on the battlefield in Ukraine to freeze gains and force Kyiv and its backers into submission, said Daryl Kimball, executive director of the Arms Control Association, a nonproliferation advocacy group in Washington.

“What everyone needs to recognize is that this is one of, if not the most, severe episodes in which nuclear weapons might be used in decades,” Kimball said. “The consequences of even a so-called ‘limited nuclear war’ would be absolutely catastrophic.”

Nobel prize in medicine awarded for research on evolution

Iran’s Khamenei blames Israel, US in first comments on protests

Why Germanys Energy Conservation Plan is Doomed to Fail

US considering responses to possible Russian escalation in Ukraine, including its potential use of tactical nuclear weapons
© tweet247.net 2022