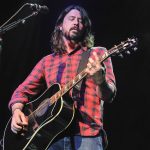 Foo Fighters have performed a set for the #SaveOurStages (#SOS) campaign, which aims to preserve US grassroots music venues affected by the coronavirus pandemic.

The half-hour set, which was live-streamed from LA’s iconic The Troubadour venue last night (October 17) shows Dave Grohl and co. restyle a selection of their songs for an acoustic show.

Last month, the legendary rockers brought back the original designs of two of their 1995 tour t-shirts to help benefit the initiative. Proceeds from the sales of the shirts went towards #SaveOurVenues (from UK sales) and #SaveOurStages (from US sales).

The shirts include the original ‘Roswell Alien Design’ for two t-shirts that originally went on sale to respectively commemorate the band’s shows on February 23 1995 at Jambalaya Club in Arcata, California, and June 3 1995 at King’s College in London.

The National Independent Venue Association is spearheading efforts to get the bipartisan Save Our Stages Act passed, which would create a $10billion (£7.8billion) small business association fund to help those small venues that are struggling or being threatened with closure due to the effects of the pandemic.

One fan who commented on the Foos’ set last night wrote: “That was the most intense version of ‘Times Like These’ I’ve ever heard and experienced. Truly beautiful.”

Another said the performance “reminded me of the MTV unplugged gig they did with Krist [from Nirvana] and the cellist when I was 18 years old. Was lucky enough to see both bands but never like this.”

In related news, LCD Soundsystem’s James Murphy last month joined the fight to save independent music venues in the US, saying that supporting the act “is the least we can do as a group of people who take care of our own”.

He said at a press conference in New York: “This is an infrastructure problem, and it has to be seen as an infrastructure problem that requires funding. I mean, even if all you care about is the bottom line, this city exports creative work. This is what we do as a city. And that work is sponsored and fostered by the independent venue and promoter scene of New York, just like it is in every other [city].

“The bigger companies that serve a need as well, don’t serve that need of sticking with artists in the beginning, of serving one, small community, of one, small scene.”