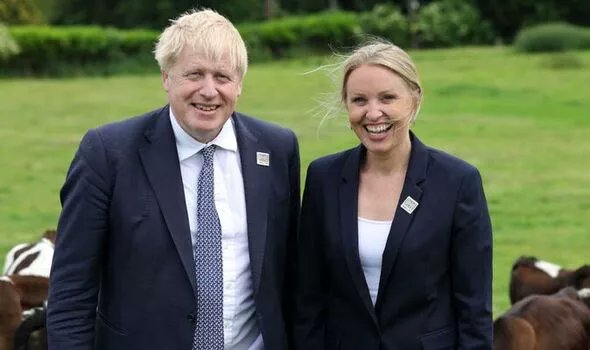 @lewis_goodall Thatcher was in Paris when the party turned on her. You’d think as a historian (supposedly) he’d be mindful of that. But he’s gone, sooner or later, so who cares what he says or does 🤷🏼‍♀️ #JohnsonMustGo.

@YvonneBurdett3 @NigelHeal No-one from the Tories has yet stepped up to do the media rounds instead of #Dowden 😂 Wonderful headlines #JohnsonMustGo.

Boris Johnson was never that popular with the public. It was the party machine that loved him. They are ditching him now. #JohnsonMustGo.

Tory commentators are saying that the result in Tiverton & Honiton is catastrophic. #JohnsonMustGo.

@IanDunt But until #JohnsonMustGo is gone and this godawful Tory govt is out on its ear there is too little to celebrate. Damage is still done every single day..

@CarolineLucas He simply cannot accept the UK population have had enough of him. The Red Wall voters want their votes back, the Tory Centrists want their party back & the UK folk just want their reputation back. Enough is enough. #ToryCriminalsUnfitToGovern #JohnsonMustGo.

@Juliest101 Good morning to you Julie, today is a good day! 😁🎉🍾 #GTTO #JohnsonMustGo.

@OliverDowden Close the door on your way out. You, no doubt, voted to keep the charlatan in a few weeks ago Oliver. You reap what you sow. Indeed rats deserting a stinking & sinking ship. #ToriesOut #JohnsonMustGo.

So I heard that @BorisJohnson said he will “listen to voters” and “keep on going”… for a wild moment I thought he was saying he will be as honourable as @OliverDowden and resign… Fat chance. #JohnsonMustGo and take his Cabinet of incompetents with him..

The Tories get their a butt kicking at the polls, #JohnsonMustGo.

This is great news, get rid of #ToryMP’s one-by-one. Yesterdays by-election results were a clear message that #JohnsonMustGo. This joker and many other MPs supported him 100%..

What is becoming apparent is those who@are resigning are being called honourable Conservatives. Where does that leave the PM. #JohnsonMustGo.

@Councillorsuzie @OliverDowden The situation with Boris as PM is untenable. He is destroying the Conservative party. It’s a real shame the Tories didn’t do the decent thing and vote him out. You really should have listened to the people! 🤷‍♀️. #peoplepower #JohnsonMustGo.